The Mill on the Floss (Paperback) 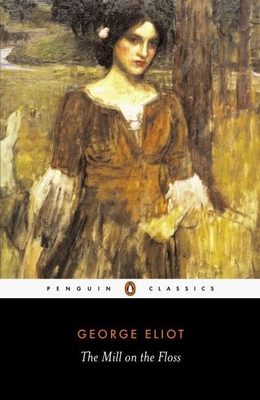 The Mill on the Floss (Paperback)

By George Eliot, A. S. Byatt (Introduction by)


In Stock—Click for Locations
Drawing on George Eliot's own childhood experiences to craft an unforgettable story of first love, sibling rivalry and regret, The Mill on the Floss is edited with an introduction and notes by A.S. Byatt, author of Possession, in Penguin Classics. Brought up at Dorlcote Mill, Maggie Tulliver worships her brother Tom and is desperate to win the approval of her parents, but her passionate, wayward nature and her fierce intelligence bring her into constant conflict with her family. As she reaches adulthood, the clash between their expectations and her desires is painfully played out as she finds herself torn between her relationships with three very different men: her proud and stubborn brother; hunchbacked Tom Wakem, the son of her family's worst enemy; and the charismatic but dangerous Stephen Guest. With its poignant portrayal of sibling relationships, The Mill on the Floss is considered George Eliot's most autobiographical novel; it is also one of her most powerful and moving. In this edition, writer and critic A.S. Byatt, author of Possession, provides full explanatory notes and an introduction relating The Mill on the Floss to George Eliot's own life and times. Mary Ann Evans (1819-80) began her literary career as a translator, and later editor, of the Westminster Review. In 1857, she published Scenes of Clerical Life, the first of eight novels she would publish under the name of 'George Eliot', including The Mill on the Floss, Middlemarch, and Daniel Deronda. If you enjoyed The Mill on the Floss, you might like Thomas Hardy's Jude the Obscure, also available in Penguin Classics.
A. S. Byatt was born in 1936 and educated in York and at Newnham College, Cambridge, of which she is now an Honorary Fellow. She taught English at University College, London, from 1972 to 183. She appears regularly on radio and television, and writes academic articles and literary journalism both in England and abroad. Her fiction includes The Shadow of the Sun; The Game; The Virgin in the Garden; Still Life; Sugar and Other Stories; Possession, winner of the 1990 Booker Prize and the 1990 Irish Times/Aer Lingus International Fiction prize; the novella Angels and Insects; The Matisse Stories; The Djinn in the Nightingale's Eye, a collection of fairy stories; Babel Tower; Elementals: Stories of Fire and Ice; The Biographers Tale; A Whistling Woman and The Little Black Book of Stories. Her work has been translated into 28 languages. Her critical work includes Degrees of Freedom: The Early Novels of Iris Murdoch, Unruly Times (on Wordsworth and Coleridge) and, with the psychoanalyst Ignês Sodré, Imagining Characters: Six Conversations About Women Writers. Passions of the Mind, a collection of critical essays, appeared in 1991; a new collection, On Histories and Stories, appeared in 2000; Portraits in Fiction, a study of the relationship between painting and the novel, and (ed.) Selected Essays, Poems and Other Writings, by George Eliot, in 2001. She was appointed DBE in 1999.
"As one comes back to [Eliot's] books after years of absence they pour out, even against our expectations, the same store of energy and heat, so that we want more than anything to idle in the warmth."
--Virginia Woolf