The Conquest of Bread (Paperback) 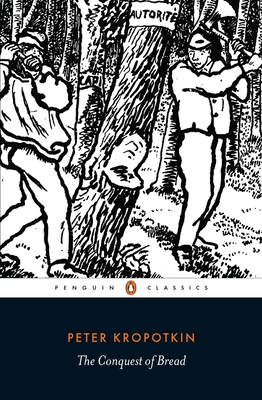 The Conquest of Bread (Paperback)


On Our Shelves Now at:
"Well-being for all is not a dream."

In this brilliantly enjoyable rallying-cry of a book, Kropotkin lays out the heart of his anarchist beliefs—beliefs that surged around the world in the late 19th and early 20th centuries and that have a renewed relevance and poignancy today. Humane and thoughtful, but also a devastating critique of how modern society is organized (with the brutal, narrow few clinging onto their wealth and privileges at the expense of the many), The Conquest of Bread is a book to be argued over, again and again.

For more than sixty-five years, Penguin has been the leading publisher of classic literature in the English-speaking world. With more than 1,500 titles, Penguin Classics represents a global bookshelf of the best works throughout history and across genres and disciplines. Readers trust the series to provide authoritative texts enhanced by introductions and notes by distinguished scholars and contemporary authors, as well as up-to-date translations by award-winning translators.
PETER KROPOTKIN (1842-1921) came from a major aristocratic Russian family but turned his back on it to embrace a life of imprisonment and exile in pursuit of his beliefs. His major works are The Conquest of Bread and Mutual Aid. His funeral was marked as the last permitted gathering of anarchists in the USSR.

DAVID PRIESTLAND (introducer) is the author of Red Flag and Merchant, Soldier, Sage.  He teaches at St Edmund's Hall, University of Oxford.