Hedda Gabler and Other Plays (Paperback) 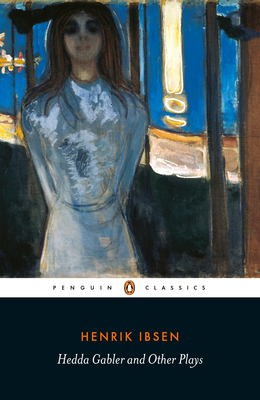 Hedda Gabler and Other Plays (Paperback)


On Our Shelves Now at:
A collection of four plays by the famed playwright, including Hedda Gabler, which features one of the most infamous women characters in theater

One of the most renowned playwrights of all time, Norwegian-born Henrik Ibsen was an influential figure in the development of realist theater. Hedda Gabler, arguably Ibsen’s greatest work, is a tumultuous and sweeping play about a woman contending with her own dissatisfaction at the turn of the nineteenth century. Considered by many critics a heroine as complex and tragic so as to rival Hamlet, Hedda finds her life in disarray after the sudden appearance of her husband’s rival—her former lover, Eilert—and, consumed by jealousy toward Eilert’s new paramour, triggers the chain of events that will lead to the play’s ultimate, shocking conclusion. The Wild Duck, The Lady from the Sea, and Rosmersholm, though lesser known, are no less provocative or brimming with psychological complexity; together, these four plays serve as timeless explorations of identity, society, power, and freedom.
Henrik Ibsen (1828–1906) is often called “the Father of Modern Drama.” Born in Norway, he enjoyed successes with the verse dramas Brand and Peer Gynt, before embarking on his great twelve-play cycle of society dramas, which includes A Doll’s House and Ghosts. After twenty-one years of self-imposed exile in Italy and Germany, he died in Norway.