A Doll's House and Other Plays (Paperback) 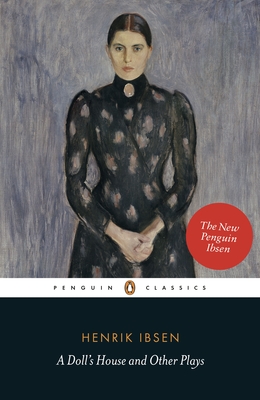 A Doll's House and Other Plays (Paperback)

Four of Ibsen’s most important plays in superb modern translations, part of the new Penguin Ibsen series.
With her assertion that she is “first and foremost a human being,” rather than a wife, mother or fragile doll, Nora Helmer sent shockwaves throughout Europe when she appeared in Henrik Ibsen’s greatest and most famous play, A Doll’s House. Ibsen’s follow-up, Ghosts, was no less radical, with its unrelenting investigation into religious hypocrisy, family secrets, and sexual double-dealing. These two masterpieces are accompanied here by The Pillars of Society and An Enemy of the People, both exploring the tensions and dark compromises at the heart of society.

HENRIK IBSEN (1828–1906) is often called 'the Father of Modern Drama'. Born in Norway in 1828, he enjoyed successes with the verse dramas Brand and Peer Gynt, before embarking on his great 12-­play cycle of society dramas, which included A Doll's House and Ghosts. After twenty-­one years of self-­imposed exile in Italy and Germany, Ibsen died in Norway in 1906.

TORE REM is a professor of British literature at the University of Oslo.