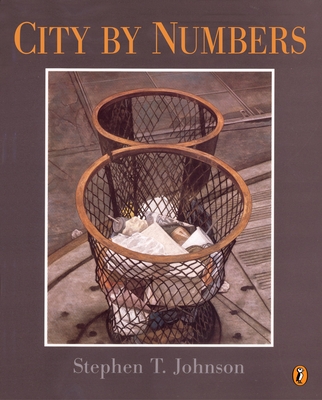 
Not On Our Shelves—Ships in 1-5 Days
In the ideal follow-up to his stunning Caldecott Honor book Alphabet City, Stephen T. Johnson turns his talents towards numbers. Wordless spreads featuring impressively photo-realistic paintings of New York City invite readers both young and old to search for the numbers zero through twenty-one hidden in the images. From a sweeping 4 found in the span of an urban bridge to the 13 of a faded crosswalk, this is an intriguing new way to think about numbers and the world around you.
Stephen T. Johnson is a highly versatile American artist whose art spans a broad range of concepts, contexts and mediums including painting, collage, drawing, sculpture and installations and can be seen in museum and gallery exhibitions, public art commissions, and through his original award-winning children’s books.

Among his public art is a large mosaic mural at the DeKalb Avenue subway station in Brooklyn, New York and a 58-foot long mural at the Universal City Metro Station in North Hollywood, California.