The History of the Decline and Fall of the Roman Empire: Volume 3 (Paperback) 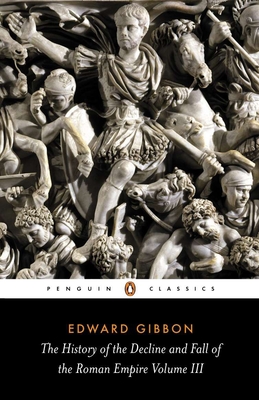 The History of the Decline and Fall of the Roman Empire: Volume 3 (Paperback)


Not On Our Shelves—Ships in 1-5 Days
Edward Gibbon's Decline and Fall of the Roman Empire compresses thirteen turbulent centuries into an epic narrative shot through with insight, irony and incisive character analysis. Sceptical about Christianity, sympathetic to the barbarian invaders and the Byzantine Empire, constantly aware of how political leaders often achieve the exact opposite of what they intend, Gibbon was both alert to the broad pattern of events and significant revealing details.

For more than seventy years, Penguin has been the leading publisher of classic literature in the English-speaking world. With more than 1,700 titles, Penguin Classics represents a global bookshelf of the best works throughout history and across genres and disciplines. Readers trust the series to provide authoritative texts enhanced by introductions and notes by distinguished scholars and contemporary authors, as well as up-to-date translations by award-winning translators.
Edward Gibbon (1737-1794), English historian. It was on a visit to Rome that he conceived the idea of his magnificent and panoramic history The History of the Decline and Fall of the Roman Empire (6 vol., 1776–88) which won immediate acclaim, despite some harsh criticism. Gibbon himself was assured of the greatness of his work, which is, indeed, one of the most-read historical works of modern times.