The Basque History of the World: The Story of a Nation (Paperback) 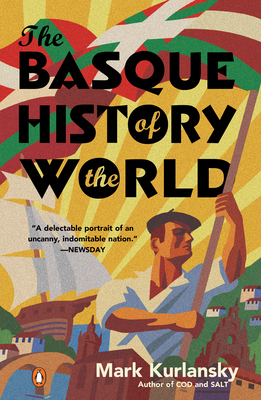 The Basque History of the World: The Story of a Nation (Paperback)


Not On Our Shelves—Ships in 1-5 Days
From Mark Kurlansky, the bestselling author of Cod, Salt, Birdseye, and Paper—the illuminating story of an ancient and enigmatic people

Straddling a small corner of Spain and France in a land that is marked on no maps except their own, the Basques are a puzzling contradiction—they are Europe's oldest nation without ever having been a country. No one has ever been able to determine their origins, and even the Basques' language, Euskera—the most ancient in Europe—is related to none other on earth. For centuries, their influence has been felt in nearly every realm, from religion to sports to commerce. Even today, the Basques are enjoying what may be the most important cultural renaissance in their long existence, as displayed by new cookbooks like chefs Alexandra Raij and Eder Montero's The Basque Book and restaurateur Jose Pizarro’s Basque.

Mark Kurlansky's passion for the Basque people and his exuberant eye for detail shine throughout this fascinating book. Like Cod, The Basque History of the World, blends human stories with economic, political, literary, and culinary history into a rich and heroic tale.

Among the Basques' greatest accomplishments:

• Exploration—the first man to circumnavigate the globe, Juan Sebastian de Elcano, was a Basque and the Basques were the second Europeans, after the Vikings, in North America
• Gastronomy and agriculture—they were the first Europeans to eat corn and chili peppers and cultivate tobacco, and were among the first to use chocolate
• Religion—Ignatius Loyola, a Basque, founded the Jesuit religious order
• Business and politics—they introduced capitalism and modern commercial banking to southern Europe
• Recreation—they invented beach resorts, jai alai, and racing regattas, and were the first Europeans to play sports with balls

“A delectable portrait of an uncanny, indomitable nation.” –Newsday

Mark Kurlansky is the New York Times bestselling author of Cod, Salt, Paper, The Basque History of the World, 1968, The Big Oyster, International Night, The Eastern Stars, A Continent of Islands, and The White Man in the Tree and Other Stories. He received the Dayton Literary Peace Prize for Nonviolence, Bon Appetit's Food Writer of the Year Award, the James Beard Award, and the Glenfiddich Award. Salt was a Los Angeles Times Book Prize finalist. He spent ten years as Caribbean correspondent for the Chicago Tribune. He lives in New York City. www.markkurlansky.com.
"Entertaining and instructive, [Kurlansky's] approach is unorthodox, mixing history with anecdotes, poems with recipes." —The New York Times Book Review

"A delectable portrait of an uncanny, indomitable nation." —Newsday