The Coming Plague: Newly Emerging Diseases in a World Out of Balance (Paperback) 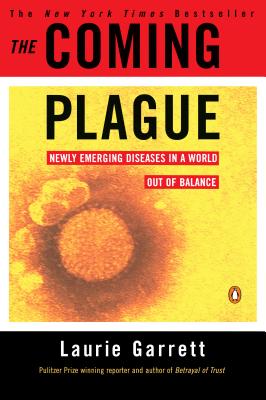 The Coming Plague: Newly Emerging Diseases in a World Out of Balance (Paperback)


Special Order—Subject to Availability
The definitive account of epidemics in our time, from the Pulitzer Prize-winning public heath expert Laurie Garrett.

Unpurified drinking water. Improper use of antibiotics. Local warfare. Massive refugee migration. Changing social and environmental conditions around the world have fostered the spread of new and potentially devastating viruses and diseases—HIV, Lassa, Ebola, and others. Laurie Garrett takes you on a fifty-year journey through the world's battles with microbes and examines the worldwide conditions that have culminated in recurrent outbreaks of newly discovered diseases, epidemics of diseases migrating to new areas, and mutated old diseases that are no longer curable. She argues that it is not too late to take action to prevent the further onslaught of viruses and microbes, and offers possible solutions for a healthier future.
Laurie Garrett is a former senior fellow for global health at the Council on Foreign Relations, She was awarded the Pulitzer Prize for Explanatory Journalism in 1996 for a series of works published in Newsday, and has also been awarded the Polk and Peabody Prizes. She is the author of The Coming Plague, Betrayal of Trust, and Ebola: Story of an Outbreak.
"A frightening vision of the future and a deeply unsettling one...a sober, scary book that not only limns the dangers posed by emerging diseases but also raises serious questions about two centuries worth of Enlightenment beliefs in science and technology and progress." —Michiko Kakutani, The New York Times

"Like her role model Rachel Carson, whose 1962 Silent Spring woke up society to environmental poisoning, Garrett aims to dispel social and political complacency about the threat of old, new, and yet-unknown microbial catastrophes in a golbal ecology that links Bujumbura, Bangkok, and Boston more closely than anyone appreciates." Richard A. Knox, The Boston Globe

"Garrett has done a brilliant job of putting scientific work into layman's language, and the scariness of medical melodramas is offset by the excitement of scientific detection." —The New Yorker

"The book is ambitious, but it succeeds...[its] scope is encyclopedic, its mass of detail startling." —The Economist

"Garrett brilliantly develops her theme that repidly increasing dangers are being ignored. Her investigations have taken over a decade to complete, and her findings are meticulously discussed and distilled." — Richard Horton, The New York Review of Books

"Encyclopedic in detail, missionary in zeal, and disturbing in its message...The Coming Plague makes fascinating if troubling reading. It is an important contribution to our awareness of human ecology and the fragility of the relative biological well-being that many of us enjoy. Garrett has mastered an extraordinary amount of detail about the pathology, epidemiology, and human events surrounding dozens of complex diseases. She writes engagingly, carrying her themes as well as the reader's interest from outbreak to outbreak. —The Los Angeles Times Book Review

"Absorbing...the insights into the personalities and the stories behind new infectious diseases are fascinating. I have the greatest admiration for Laurie Garrett." —Abraham Verghese, M.D., author of In the Heartland: A Doctor's Story of a Town and Its People in the Age of AIDS

"A masterpiece of reporting and writing, The Coming Plague is the best and most thorough book on the terrifying emergence of new plagues. The level of detail is amazing, with fascinating portraits of the so-called 'disease cowboys,' the doctors and scientists who fight infectious diseases on the front lines. The Coming Plague is a must read for anyone interested in the biological fate of the human species." —Richard Preston, New York Times-bestselling author of The Hot Zone