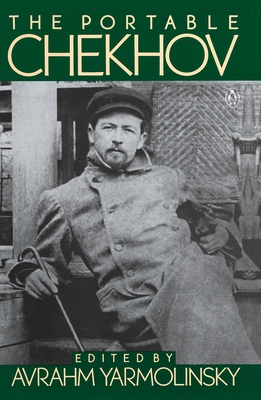 
In Stock—Click for Locations
Anton Chekhov remarked toward the close of his life that people would stop reading him a year after his death. But his literary stature and popularity have grown steadily with the years, and he is accounted the single most important influence on the development of the modern short story.

Edited and with an introduction by Avrahm Yarmolinsky, The Portable Chekhov presents twenty-eight of Chekhov’s best stories, chosen as particularly representative of his many-sided portrayal of the human comedy—including “The Kiss,” “The Darling,” and “In the Ravine”—as well as two complete plays; The Boor, an example of Chekhov’s earlier dramatic work, and The Cherry Orchard, his last and finest play. In addition, this volume includes a selection of letters, candidly revealing of Chekhov’s impassioned convictions on life and art, his high aspirations, his marriage, and his omnipresent compassion.
Anton Pavlovich Chekhov (1860–1904) was a Russian playwright and short story writer who is considered to be among the greatest writers of short fiction in history. His career as a playwright produced four classics, and his best short stories are held in high esteem by writers and critics. Along with Henrik Ibsen and August Strindberg, Chekhov is often referred to as one of the three seminal figures in the birth of early modernism in the theater. Chekhov practiced as a medical doctor throughout most of his literary career: "Medicine is my lawful wife," he once said, "and literature is my mistress."Chekhov renounced the theatre after the disastrous reception of The Seagull in 1896, but the play was revived to acclaim in 1898 by Constantin Stanislavski's Moscow Art Theatre, which subsequently also produced Chekhov's Uncle Vanya and premiered his last two plays, Three Sisters and The Cherry Orchard. These four works present a challenge to the acting ensemble as well as to audiences, because in place of conventional action Chekhov offers a "theatre of mood" and a "submerged life in the text."Chekhov had at first written stories only for financial gain, but as his artistic ambition grew, he made formal innovations which have influenced the evolution of the modern short story. He made no apologies for the difficulties this posed to readers, insisting that the role of an artist was to ask questions, not to answer them. Anton Chekhov was the author of hundreds of short stories and several plays and is regarded by many as both the greatest Russian storyteller and the father of modern drama.

Avrahm Yarmolinsky (January 13, 1890–September 28, 1975) was an author, translator, and teacher. Yarmolinsky primarily taught at Columbia University and City College of New York. His books include, Dostoievsky, A Life, A Treasury of Russian Verse, and The Russian Literary Imagination.