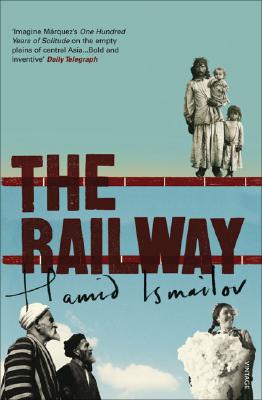 
Special Order—Subject to Availability
Set mainly in Uzbekistan between 1900 and 1980, this compelling novel introduces to us the inhabitants of the small town of Gilas on the ancient Silk Route. Among those whose stories we hear are Mefody-Jurisprudence, the town's alcoholic intellectual; Father Ioann, a Russian priest; Kara-Musayev the Younger, the chief of police; and Umarali-Moneybags, the old moneylender. Their colorful lives offer a unique and comic picture of a little-known land populated by outgoing Mullahs, incoming Bolsheviks, and a plethora of Uzbeks, Russians, Persians, Jews, Koreans, Tatars, and Gypsies. At the heart of both the town and the novel stands the railway station—a source of income and influence, and a connection to the greater world beyond the town. Rich and picaresque, The Railway is highly sophisticated yet contains a naive delight in its storytelling, chronicling the dramatic changes felt throughout Central Asia in the early 20th century.
Hamid Ismailov, regarded as a man of "unacceptably democratic tendencies" in Uzbekistan, was forced to flee his homeland, and so came to London in 1992. He was recruited by the BBC World Service to set up its Central Asia Service. He has published many books both in Russia and in Uzbekistan, but this is the first time his work has been translated into English. Robert Chandler has translated the poetry of Sappho and Guillaume Apollinaire, as well as novels by Vasily Grossman and Aleksandr Pushkin.
"Imagine Márquez's One Hundred Years of Solitude on the empty plains of central Asia . . . a bold and inventive, if damning, whirl through Central Asia's 20th-century history."  —Daily Telegraph

"All picaresque exuberance, a jumble of influences from Persian to Soviet and beyond."  —Sunday Herald