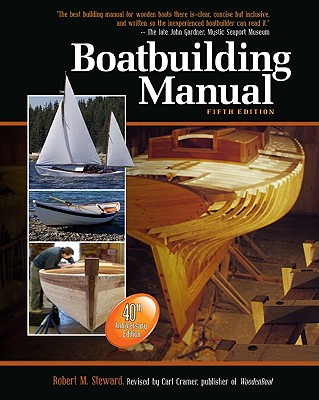 Get the latest boatbuilding tips from this updated classic

Since its first publication in 1970, Boatbuilding Manual has become the standard reference in boatbuilding and boat design schools, in the offices of professional builders, and in the basement workshops of home builders. No other boatbuilding text has simultaneously served the disparate needs of professional and amateur audiences so successfully. Carl Cramer, the publisher of WoodenBoat and Professional Boatbuilder magazines, has fully updated this fifth edition with the latest in boatbuilding techniques and developments.

The late Robert M. Steward spent more than 55 years in the boatbuilding business, working for various design offices (among them the highly regarded Philip L. Rhodes firm) and for numerous builders on both coasts. For 24 years he was a designer and engineer at Huckins Yacht Corporation in Jacksonville, FL, and served for a year as its president before his retirement in 1981. He remained active as a designer and marine consultant until his death in 1996. Carl Cramer has been the publisher of WoodenBoat magazine for more than 20 years, during which time WoodenBoat Publications launched Professional Boatbuilder magazine (1989) and IBEX, the boatbuilders' trade show (1991), both of which Carl oversees. Prior to his career at WoodenBoat, Carl graduated from the Yacht Design Institute and apprenticed as a boat designer and builder in the early 1970s.