The Sense of Wonder (Hardcover) 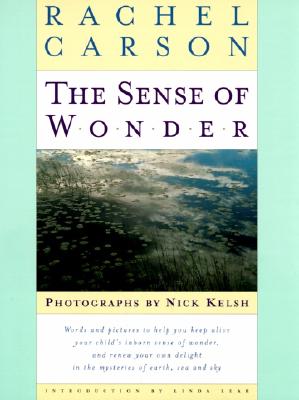 The Sense of Wonder (Hardcover)


Not On Our Shelves—Ships in 1-5 Days
First published more than three decades ago, this reissue of Rachel Carson's award-winning classic brings her unique vision to a new generation of readers. Stunning new photographs by Nick Kelsh beautifully complement Carson's intimate account of adventures with her young nephew, Roger, as they enjoy walks along the rocky coast of Maine and through dense forests and open fields, observing wildlife, strange plants, moonlight and storm clouds, and listening to the "living music" of insects in the underbrush.

"If a child is to keep alive his inborn sense of wonder." Writes Carson, "he needs the companionship of at least one adult who can share it, rediscovering with him the joy, excitement and mystery of the world we live in." The Sense of Wonder is a refreshing antidote to indifference and a guide to capturing the simple power of discovery that Carson views as essential to life.

In her insightful new introduction, Linda Lear remembers Rachel Carson's groundbreaking achievements in the context of the legendary environmentalist's personal commitment to introducing young and old to the miracles of nature.

Kelsh's lush photographs inspire sensual, tactile reactions: masses of leaves floating in a puddle are just waiting to be scooped up and examined more closely. An image of a narrow path through the trees evokes the earthy scent of the woods after a summer rain. Close-ups of mosses and miniature lichen fantasy-lands will spark innocent'as well as more jaded'imaginations. Like a curious child studying things underfoot and within reach, Kelsh's camera is drawn to patterns in nature that too often elude hurried adults'a stand of beech trees in the springtime, patches of melting snow and the ripples from a pebble tossed into a slow-moving stream.

The Sense of Wonder is a timeless volume that will be passed on from children to grandchildren, as treasured as the memory of an early-morning walk when the song of a whippoorwill was heard as if for the first time.

RACHEL CARSON (1907-1964) was known as “the patron saint of the environmental movement.” She was the author of Silent Spring, which exposed the dangers of pesticides and fertilizers. She passed away as she was finishing The Sense of Wonder.

NICK KELSH is a photographer who is the author of How to Photograph Your Life. A native of Fargo, North Dakota, he lives in Philadelphia with his wife, Anne.