Always Faithful: A Story of the War in Afghanistan, the Fall of Kabul, and the Unshakable Bond Between a Marine and an Interpreter (Hardcover) 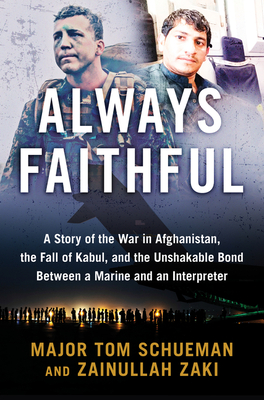 Always Faithful: A Story of the War in Afghanistan, the Fall of Kabul, and the Unshakable Bond Between a Marine and an Interpreter (Hardcover)

Band of Brothers meets Argo in this dramatic and heartfelt dual memoir of the war in Afghanistan told by two men from opposite worlds. Always Faithful entwines the stories of Marine Major Tom Schueman, and his friend and Afghan interpreter, Zainullah “Zak” Zaki, as they describe their parallel lives, converging paths, and unbreakable bond in the face of overwhelming danger, culminating in Zak and his family’s harrowing escape from Kabul.

In August of 2021, just days shy of the 20th anniversary of 9/11, America ended its longest war. The speed of the Afghanistan’s fall was so stunning that thousands of Afghan citizens who had helped American forces over the course of two decades—and had been promised visas in return—were suddenly stranded, in extreme, imminent danger. As the world watched the shocking scenes of desperation at the Kabul airport in the final two weeks of August, Maj. Tom Schueman fought—both behind the scenes and through a social media campaign—to get his friend and former Afghan interpreter, Zak, out of Afghanistan before he and his family were discovered by the Taliban. When Zak and his family finally took off from the airport mere days before the US left the country, the years-long effort to get Zak to America culminated in two simple words on Instagram: “Wheels up.”

Now in Always Faithful, Tom and Zak tell the full story of the divergent paths that led them to Afghanistan, the dangerous road they walked together in service to America, and how their commitment to each other ended up saving them both. Brilliantly told in Tom’s and Zak’s alternating first person voices, Always Faithful tracks the parallel lives of these two men who each spent their childhoods in fear, peril, and poverty, and turned to war in attempt to build a meaningful future. On an inevitable course towards each other, their lives dovetail in Afghanistan’s deadly Helmand Valley, where they formed a brotherhood that transcends even the most overwhelming of odds, eventually culminating in Zak’s harrowing, eleventh-hour rescue.

The end result is an intensely personal and uniquely ground-level account of Tom and Zak’s experience, Always Faithful gives readers a 360-degree view of the war. At once provocative and heart pounding, their stories together form a microcosm of the complicated and lasting effects of America’s longest war. Through their eyes and their experiences, they challenge readers to explore the legacy of the war for American and Afghan citizens alike, as we all collectively seek to understand whether twenty years of war was worth the price.

Major Tom Schueman served in Afghanistan for sixteen months, including the single bloodiest battle of the war in Afghanistan as a platoon commander with the Third Battalion, Fifth Marines in Helmand Province. Schueman redeployed to Afghanistan as a JTAC and advisor to the Afghan National Army while he was a member of First Reconnaissance Battalion. Schueman went on to get his master’s in English literature at Georgetown University and teach English literature at the United States Naval Academy. He is currently a student at the Naval War College and remains on active duty. He is also the founder of the nonprofit Patrol Base Abbate.

Zainullah “Zak” Zaki is one of nine children and was raised by a subsistence farmer in eastern Afghanistan. Zak served as an interpreter for the U.S. forces during the war in Afghanistan with the Third Battalion, Fifth Marines in Helmand Province beginning in 2010, and later worked for the U.S. government in Kunar Province from 2012 to 2014. After more than six years battling bureaucracy with Major Tom Schueman as his advocate, Zak successfully immigrated to America with his family in 2021. He is currently awaiting a final ruling on his immigration status and working in construction in San Antonio, Texas.

In plain old good writing, this book tells how two individuals fought the forces of the Taliban, Afghan corruption, and U.S. government bureaucracy to bring one interpreter’s family to safety and freedom. It is a gripping and poignant story of quiet heroism, with a hair-raising ending. You will finish this book feeling triumphant for the few that got out, and angry and sad for the many we shamefully left behind. — Karl Marlantes, author of Matterhorn, What It Is Like to Go to War, and Deep River

Schueman and Zaki offer a haunting account of the courage and sacrifices of U.S. troops alongside their Afghan partners over the past two decades. Amid the backdrop of America’s longest war in history and hopes out of reach, their stories are a testament to the enduring human spirit. — U.S. Senator Dick Durbin

A tremendous look inside the relationships forged in combat and the dedication and sacrifice of the Afghans and Marines who served side by side to gain a better future for Afghanistan. This book is honest, compelling, and full of suspense. This book is Honor, Courage, and Commitment at its finest. — Lieutenant General Lori Reynolds, United States Marine Corps (retired), former Deputy Commandant for Information

A classic, heartwarming story of two hardened warriors, one Afghan and the other American, who keep faith with each other and emerge triumphant from impending death. This incredible rescue shows what determined Americans can accomplish, despite government incompetence. A fitting metaphor for America’s longest and most bungled war. — Bing West, bestselling author of The Last Platoon: A Novel of the Afghanistan War

Wars are full of fascinating stories. As part literary memoir and part thriller, Always Faithful certainly is one of those. It’s a book that demands attention. By telling the story from both an American and an Afghan perspective, Always Faithful offers a unique view within the literature of America’s post-9/11 wars, which often lacks the voices of the people most affected. As we contemplate the meaning and value of twenty years of war, Tom Schueman and Zainullah Zaki offer us a path to understand the human cost of service in Afghanistan and the inherent bonds of our shared humanity. — Steven Pressfield, bestselling author of Gates of Fire and A Man at Arms