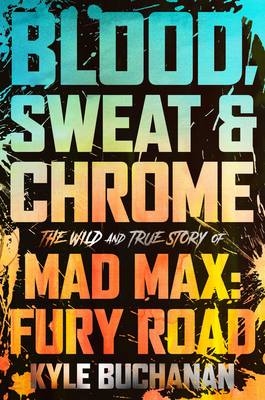 One of Entertainment Weekly's Best Books of 2022!

"New York Times journalist Kyle Buchanan details the bonkers construction of director George Miller's long-awaited and often seemingly-doomed fourth Mad Max movie via testimony from the filmmaker, Charlize Theron, Tom Hardy, and a host of others. The result is an epic and – when it comes to the Theron-Hardy on-set relationship – acrimonious tale no less jaw-dropping than the movie itself." — Entertainment Weekly

A full-speed-ahead oral history of the nearly two-decade making of the cultural phenomenon Mad Max: Fury Road—with more than 130 new interviews with key members of the cast and crew, including Charlize Theron, Tom Hardy, and director George Miller, from the pop culture reporter for The New York Times, Kyle Buchanan.

It won six Oscars and has been hailed as the greatest action film ever, but it is a miracle Mad Max: Fury Road ever made it to the screen… or that anybody survived the production. The story of this modern classic spanned nearly two decades of wild obstacles as visionary director George Miller tried to mount one of the most difficult shoots in Hollywood history.

Production stalled several times, stars Tom Hardy and Charlize Theron clashed repeatedly in the brutal Namib Desert, and Miller’s crew engineered death-defying action scenes that were among the most dangerous ever committed to film. Even accomplished Hollywood figures are flummoxed by the accomplishment: As the director Steven Soderbergh has said, “I don’t understand how they’re not still shooting that film, and I don’t understand how hundreds of people aren’t dead.”

Kyle Buchanan takes readers through every step of that moviemaking experience in vivid detail, from Fury Road’s unexpected origins through its outlandish casting process to the big-studio battles that nearly mutilated a masterpiece. But he takes the deepest dive in reporting the astonishing facts behind a shoot so unconventional that the film’s fantasy world began to bleed into the real lives of its cast and crew. As they fought and endured in a wasteland of their own, the only way forward was to have faith in their director’s mad vision. But how could Miller persevere when almost everything seemed to be stacked against him?

With hundreds of exclusive interviews and details about the making of Fury Road, readers will be left with one undeniable conclusion: There has never been a movie so drenched in sweat, so forged by fire, and so epic in scope.

"New York Times journalist Kyle Buchanan details the bonkers construction of director George Miller's long-awaited and often seemingly-doomed fourth Mad Max movie via testimony from the filmmaker, Charlize Theron, Tom Hardy, and a host of others. The result is an epic and – when it comes to the Theron-Hardy on-set relationship – acrimonious tale no less jaw-dropping than the movie itself." — Entertainment Weekly

“[A] must-have oral history… it’s as if the entire cast and crew were in a big room, sharing their stories. The book is so good that, even though we know how the story turned out… we are somehow in a near-constant state of suspense… Filled with surprises and illuminating behind-the-scenes stories, this is the book Mad Max fans crave.” — Booklist (starred review)

“An insider’s guide to Fury Road that will inspire fans to rewatch and leave them eager for the next installment on Furiosa.” — Library Journal

“The pop culture reporter for The New York Times assembles scores of voices that rev up a narrative that will excite Mad Max fans specifically, and entertain film buffs generally, on how ideas are realized as epics…. Not unlike “Fury Road,” Buchanan’s “Blood, Sweat & Chrome” succeeds largely at the level you choose, summed up best by War Boy Ben Smith-Peterson: ‘Sometimes you don’t need to know the backstory of a character that doesn’t have any lines... but I don’t know. I’m a stunt guy. I let people set me on fire.’" — Associated Press

"This in-depth oral history [is] as awe-inspiring as the film itself. This is as much a story of persistence as of filmmaking genius. Boasting well over 100 interviewees, the level of New York Times journalist Kyle Buchanan’s access is impressive....A book that doesn’t shy away from candid revelations; this entertaining tome is fitting testament to a film that played by its own rules." — SFX