Alias Anna: A True Story of Outwitting the Nazis (Hardcover) 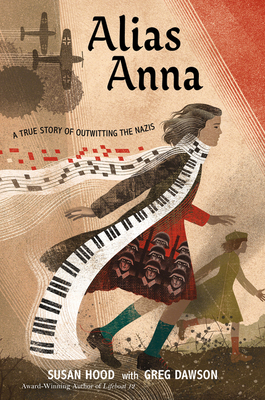 Alias Anna: A True Story of Outwitting the Nazis (Hardcover)

She wouldn’t be Zhanna. She’d use an alias. A for Anna. A for alive.

When the Germans invade Ukraine, Zhanna, a young Jewish girl, must leave behind her friends, her freedom, and her promising musical future at the world’s top conservatory. With no time to say goodbye, Zhanna, her sister Frina, and their entire family are removed from their home by the Nazis and forced on a long, cold, death march. When a guard turns a blind eye, Zhanna flees with nothing more than her musical talent, her beloved sheet music, and her father’s final plea: “I don’t care what you do. Just live.”

This incredible true story in-verse about sisterhood, survival, and music is perfect for fans of Lifeboat 12, Inside Out and Back Again, and Alan Gratz.

Includes extensive back matter with original letters and photographs, additional information, and materials for further reading.

Susan Hood is the award-winning author of many books for young readers, including Alias Anna, Lifeboat 12, Ada’s Violin, Brothers in Arms, The Last Straw: Kids vs. Plastics, Shaking Things Up, and Titan and the Wild Boars. She is the recipient of an E. B. White Read-Aloud Picture Book Honor, the Christopher Award, the Américas Award for Children’s and Young Adult Literature, the Golden Kite Award, and the Bank Street Flora Stieglitz Straus Award, given annually for “a distinguished work of nonfiction.” Visit her at susanhoodbooks.com.

Greg Dawson has been a journalist for over 50 years, winning awards for his work as a TV critic, columnist and feature writer at magazines and newspapers including The Boston Herald, Indianapolis Star, and Orlando Sentinel. He is the author of two books on the Holocaust, Hiding in the Spotlight and Judgment Before Nuremberg, and Busted in Bloomington, a collective memoir of the ‘60s written with his wife, Candy Dawson. To learn more go to www.gregdawsonbooks.com.

This lyrical book is one of the most truthful survivor stories I’ve ever read. I think this book will be a page-turner for adolescents.  — Jack Kliger, President and CEO of the Museum of Jewish Heritage

A profound and powerful story of the Holocaust, told with heart, soul, and music. — Kathryn Lasky, Newbery Honoree and winner of the National Jewish Book Award

A harrowing and remarkable story of strength and survival.  — Kirkus Reviews

Appended with generous back matter, this offers a revealing look at an underreported Holocaust chapter. — Booklist

Hood tells Zhanna’s sto­ry through both free verse and a rich array of forms. The use of poet­ry is effec­tive, echo­ing in its com­plex­i­ty the music of a sin­gu­lar life caught in the chaos of history. This high­ly rec­om­mend­ed book includes exten­sive back­ground mate­r­i­al, pho­tos, sources, lists of musi­cal com­po­si­tions, and poet­ic forms. — Jewish Book Council

A tribute to the power of girls. — The Sydney Taylor Schmooze

On the Audio Edition: "A touching story of art, struggle, and overcoming persecution, with a narration that is a testament to survival."   — Booklist