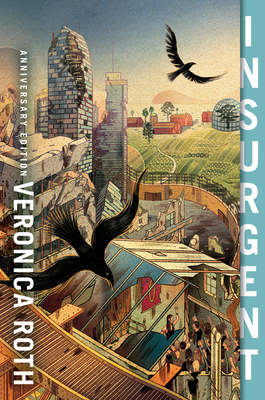 This is book number 2 in the Divergent Series series.

Celebrate the 10th anniversary of Divergent with a special edition of Insurgent, the second book in the  #1 New York Times bestselling series that captured the hearts of millions of readers and inspired a series of major motion pictures starring Shailene Woodley. This edition features exclusive content from Veronica Roth and beautiful reimagined cover art from award-winning illustrator Victo Ngai.

As war surges in the factions of dystopian Chicago all around her, Tris attempts to save those she loves—and herself—while grappling with haunting questions of grief and forgiveness, identity and loyalty, politics and love. Veronica Roth's second #1 New York Times bestseller continues the dystopian thrill ride that began in Divergent.

“Roth knows how to write. The novel’s love story, intricate plot, and unforgettable setting work in concert to deliver a novel that will rivet fans of the first book.” —Publishers Weekly

“An addictive sequel to the acclaimed Divergent. Another spectacular cliffhanger.” —Kirkus Reviews

“The next big thing.” — Rolling Stone

“Roth knows how to write. The novel’s love story, intricate plot, and unforgettable setting work in concert to deliver a novel that will rivet fans of the first book.” — Publishers Weekly

“In this addictive sequel to the acclaimed Divergent,a bleak post-apocalyptic Chicago collapses into all-out civil war. Another spectacular cliffhanger. Anyone who read the first book was dying for this one months ago; they’ll hardly be able to wait for the concluding volume.” — Kirkus Reviews

“Insurgent explores several critical themes, including the importance of family and the crippling power of grief at its loss. A very good read.” — School Library Journal