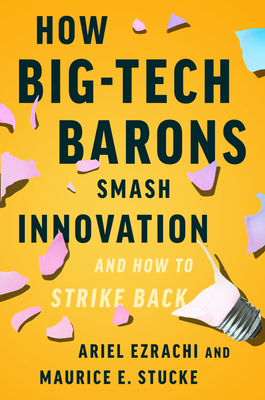 Two market experts deconstruct the drivers and inhibitors to innovation in the digital economy, explain how large tech companies can stifle disruption, assess the toll of their technologies on our well-being and democracy, and outline policy changes to take power away from big tech and return it to entrepreneurs.

Silicon Valley’s genius combined with limited corporate regulation promised a new age of technological innovation in which entrepreneurs would create companies that would in turn fuel unprecedented job growth. Yet disruptive innovation has stagnated even as the five leading tech giants, which account for approximately 25 percent of the S&P 500’s market capitalization, are expanding to unimaginable scale and power. In How Big-Tech Barons Smash Innovation—and How to Strike Back, Ariel Ezrachi and Maurice E. Stucke explain why this is happening and what we can do to reverse it.

While many distrust the Big-Tech Barons, the prevailing belief is that innovation is thriving online. It isn’t. Rather than disruptive innovations that create significant value, we are getting technologies that primarily extract value and reduce well-being. Using vivid examples and relying on their work in the field, the authors explain how the leading tech companies design their sprawling ecosystems to extract more profits (while crushing any entrepreneur that poses a threat). As a result, we get less innovation that benefits us and more innovations that surpass the dreams of yesteryears’ autocracies. The Tech Barons’ technologies, which seek to decode our emotions and thoughts to better manipulate our behavior, are undermining political stability and democracy while fueling tribalism and hate.

But it’s not hopeless. The authors reveal that sustained innovation scales with cities not companies, and that we, as a society, should profoundly alter our investment strategy and priorities to certain entrepreneurs (“Tech Pirates”) and cities’ infrastructure.

Ariel Ezrachi is the Slaughter and May Professor of Competition Law and a Fellow of Pembroke College, Oxford. He serves as the Director of the University of Oxford Centre for Competition Law and Policy. He is co-editor-in-chief of the Journal of Antitrust Enforcement (OUP) and the author, co-author, editor and co-editor of numerous books, including Virtual Competition - The Promise and Perils of the Algorithm Driven Economy (2016, Harvard), EU Competition Law - An Analytical Guide to the Leading Cases (6th ed, 2018, Hart), Global Antitrust Compliance Handbook (2014, OUP), Research Handbook on International Competition Law (2012 EE), Intellectual Property and Competition Law: New Frontiers (2011, OUP), Criminalising Cartels: Critical Studies of an International Regulatory Movement (2011, Hart), Article 82 EC - Reflections on its recent evolution (2009, Hart) and Private Labels, Brands and Competition Policy (2009, OUP).​His research and commentary have been featured in The Economist, The New Yorker, Wall Street Journal, Financial Times, The Guardian (opinion), The Guardian, Nikkei, Times Higher Education, Harvard Business Review, HBR (2), Berkeley Technology Law Journal, Chicago University Pro Market, New Scientist, Politico, OBLB, WIRED, Click - BBC, CPI, Concurrences, The Scotsman, The Times, Fast Company, Nesta, UNCTAD, OECD, Forbes, Factor, The Australian, NRC 2016, NRC 2018, Business Insider, CMS Wire, Cited, IAI, Les Echos, ACCC, ZDnet, and other international outlets. His work on algorithmic collusion (together with Prof Stucke) has been central to policy discussions in international organisations and competition agencies (including, among others, the CMA, OECD, UN, House of Lords, Monopolkommission).Prof. Ezrachi develops training and capacity building programmes in competition law and policy for the private and public sectors, including training programmes for European judges endorsed and subsidised by the European Commission. He is an Academic Advisor to the European Consumer Organisation - BEUC, member of the Independent Committee on Digital Platforms, member of UNCTAD Research Partnership Platform, and a former Non-Governmental Advisor to the ICN.

Maurice E. Stucke is a co-founder of the Data Competition Institute, a law professor at the University of Tennessee, and of counsel at the Konkurrenz Group. Professor Stucke publishes and speaks regularly on competition policy in the United States, Europe, and Asia. Professor Stucke serves as one of the United States’ non-governmental advisors to the International Competition Network, as a Senior Fellow at the American Antitrust Institute, where he chaired a committee on the media industry that drafted a transition report for the incoming Obama administration, on the board of the Academic Society for Competition Law, and on advisory board of the Institute for Consumer Antitrust Studies. Professor Stucke received a number of awards including a Fulbright fellowship to teach at the China University of Political Science and Law in Beijing, and the Jerry S. Cohen Memorial Fund Writing Award for his article “Behavioral Economists at the Gate: Antitrust in the Twenty-First Century.” He has twenty years experience handling a range of competition policy issues in both private practice and as a prosecutor at the U.S. Department of Justice.

[This] remarkable new book… should be required reading for everyone at Ofcom, the Competition and Markets Authority and the DCMS. — John Naughton, The Guardian

In all, it is a strong argument that deserves a good hearing: far from chilling innovation, the book concludes, reining in Big Tech may be the only way to save it. — The Financial Times

‘Ariel Ezrachi’s and Maurice E. Stucke’s scholarly research on the digital economy, competition and antitrust law, and economic inequality have made waves in the policy debate space... The digital world has been changing so rapidly, but their proposals for the way forward are promising. Their book is a wide-angle look at where we are, and who and what we—as small businesses and everyday internet users—are up against. And if more people read How Big-Tech Barons Smash Innovation—and How to Strike Back I think it will enable more fertile ground for truly helpful and humane innovation, online and off.’ — Gabbi Cisneros, Porchlight

Using vivid examples and relying on their work in the field, the authors explain how the leading tech companies design their sprawling ecosystems to extract more profits (while crushing any entrepreneur that poses a threat). — Porchlight