Barack Before Obama: Life Before the Presidency (Hardcover) 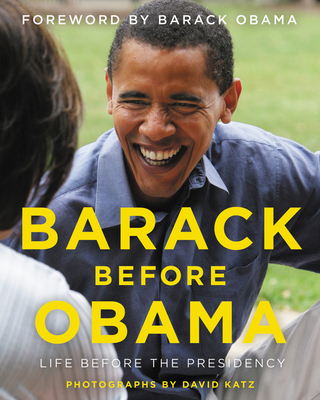 Barack Before Obama: Life Before the Presidency (Hardcover)

A People Pick of the Week

One of USA Today’s 5 Books Not to Miss

One of Forbes’ 5 Books to Read in December

A personal, intimate photographic celebration of President Barack Obama, featuring over 200 rare and never-before seen images from the years prior to his presidency, from photographer, friend, and former aide David Katz

In 2004, David Katz worked alongside then Senate-hopeful Barack Obama as a photographer and personal aide. He spent approximately six days a week alongside the future president as Obama campaigned across downstate Illinois, and the two developed a close, professional, and personal relationship. What began as a long-shot Senate run culminated with the election of America’s first African American president in 2008, which Katz also photographed.

During this time, David was never without his camera, capturing quotidian scenes from the life of a man who would soon become known the world over: a dad playing with his small daughters; a young unknown politician walking the streets of New York by himself with no one noticing; a devoted husband lovingly making faces at his wife in an elevator. In 2004, after seeing the unique and touching photographs David had amassed, Annie Leibovitz gave him some advice: “Don’t release these photos of Obama for at least fifteen years. They need time to age.”

Now, fifteen years later, Barack Before Obama is the treasury of these photographs. Pulled from an archive of more than ninety thousand images, every photograph in this volume is like nothing that has been seen before: the ease in which David captures the spirit and essence of one of our most beloved first families is unparalleled, and it is in this affectionate familiarity that his photographs sing. Warm, engaging captions tell the stories behind the photos—the surprise meeting with Nelson Mandela, the back room conversation before the rally, the emotion after sending one of the Obamas’ daughters off to school—bringing readers closer than ever to the spirit and motivation behind the extraordinary man who became our forty-fourth president.

Barack Before Obama is a unique collection of images illustrating the making of an American icon. A moving document of an historic moment, it’s the perfect gift for all those who want to remember it.

DAVID KATZ started as one of the first ten employees on Barack Obama’s Senate campaign and spent approximately nine months driving, photographing, and serving the would-be president during the 2004 Senate campaign. In 2008, Katz returned after graduating from Stanford’s Graduate School of Business to become the official campaign photographer, a position he held from July to November 2008. After Obama was elected president, Katz served in the Energy Department and at the White House in numerous policy roles. He is a frequent golf partner of President Obama and now a technology executive in San Francisco.

Barack Obama is a former senator, bestselling author, and the forty-fourth president of the United States. He was born in Hawaii, spent much of his life in Illinois, and now lives with his wife and two daughters in Washington, DC.

“An arresting look back at history in the making.” — People

“An intimate look at the West Wing and the first family during the Obama years.” — Forbes, “5 Books to Read in December”

“Made me feel like an official insider.” — Book Referees

“This lively book of photographs . . .  capture[s] quiet moments of intimacy, reflection, and joy. . . Katz’s pictures are professional but casual, betraying his unique relationship with his subject: Katz was a political photographer but also Obama’s personal aide, driving Obama across Illinois during the campaign for Senate. That closeness is evident.” — Booklist

“This historic collection captures the transformation of Barack Obama from hopeful candidate to 44th president of the United States.” — Publishers Weekly

“A brilliantly photographed tribute to the rise of the 44th president.” — Kirkus Reviews (starred review)

“One of the reasons David Katz was able to so brilliantly document Barack Obama’s meteoric rise is because the President trusted him to capture everything from intimate family moments to backstage before the speech of a lifetime. Barack Before Obama is a thoroughly enjoyable reminder that long before the 44th President stepped onto the national scene in 2004, he was a loving family man, a driven public servant, and a once-in-a-generation talent who inspired audacious hope in a country that needed it.” — Jon Favreau, former Director of Speechwriting for Barack Obama, founder of Crooked Media, host of Pod Save America

“There was a beautiful idealism to Barack Obama’s long-shot campaign for the U.S. Senate in 2004. David Katz captures that early journey and Obama’s inspiring run up to the White House years in this brilliant collection of behind-the-scenes photographs.”
— David Axelrod, former senior advisor to Barack Obama and author of Believer: My Forty Years in Politics

“These photos document the improbable rise of Barack Obama as well as any words can. You feel like you are in the room as he moves from State Senator to President of the United States.” — David Plouffe, former campaign manager for Barack Obama and author of The Audacity to Win

"The trust the Obamas had in David shines through in these one-of-a-kind images, which display a familiarity rarely seen in political photography. They provide a moving portrait of their extraordinary journey to the White House.” — Valerie Jarrett, Former senior advisor to Barack Obama and author of Finding My Voice: My Journey to the West Wing and the Path Forward