While I Was Away (Paperback) 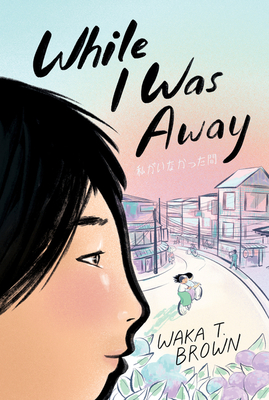 While I Was Away (Paperback)

The Farewell meets Erin Entrada Kelly's Blackbird Fly in this empowering middle grade memoir from debut author Waka T. Brown, who takes readers on a journey to 1980s Japan, where she was sent as a child to reconnect to her family’s roots.

When twelve-year-old Waka’s parents suspect she can’t understand the basic Japanese they speak to her, they make a drastic decision to send her to Tokyo to live for several months with her strict grandmother. Forced to say goodbye to her friends and what would have been her summer vacation, Waka is plucked from her straight-A-student life in rural Kansas and flown across the globe, where she faces the culture shock of a lifetime.

In Japan, Waka struggles with reading and writing in kanji, doesn’t quite mesh with her complicated and distant Obaasama, and gets made fun of by the students in her Japanese public-school classes. Even though this is the country her parents came from, Waka has never felt more like an outsider.

If she’s always been the “smart Japanese girl” in America but is now the “dumb foreigner” in Japan, where is home...and who will Waka be when she finds it?

Waka T. Brown was the first American born in her family. She is a Stanford graduate with a Master’s degree in secondary education. She’s currently an instructor at the Stanford Program on International and Cross-Cultural Education (SPICE), authoring curriculum on several international topics, and winning the Association for Asian Studies’ national Franklin Buchanan Prize. She’s also been awarded the US–Japan Foundation and EngageAsia’s national 2019 Elgin Heinz Outstanding Teacher award for her groundbreaking endeavors in teaching about US–Japan relations to high school students in Japan and promoting cultural exchange awareness. While I Was Away is her debut book. She lives with her family in Portland, Oregon.

"Conversational and accessible. An emotional, contemplative tale of risking and growing." — Kirkus Reviews

"[An] engaging memoir." — Bulletin of the Center for Children’s Books

"Brown’s debut explores having one foot in two cultures in an age-appropriate memoir. This personal story offers readers a glimpse at Japanese and American cultural differences while stressing that what makes things different is also what makes them unique." — Publishers Weekly

"Fans of Erin Entrada Kelly and Jasmine Warga will enjoy Brown’s honest exploration of differences between American and Japanese culture and her sometimes bumpy journey to fit in. This memoir artfully depicts Brown’s experience as a child who feels pulled between two cultures. A welcome addition to any middle grade collection." — School Library Journal

"Poignant and realistic. Today's tweens will see many similarities between [Waka's] experiences and their own. Immigrants from any culture will identify with the difficulties of negotiating a new country and school. " — Booklist (starred review)

"Waka fills her book with all the pathos, yearning, frustrations, and humor you might find in a middle grade novel. The important difference? It’s all true. It’s all real. It’s all enthralling. A thorough delight." — Betsy Bird, A Fuse #8 Production (SLJ blog)