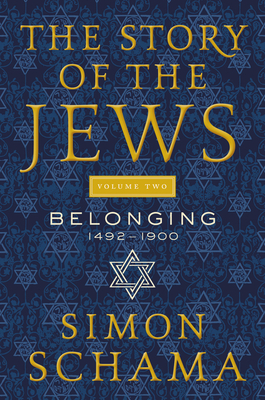 In the second of two volumes of this magnificently illustrated cultural history--the tie-in to the PBS and BBC series The Story of the Jews--Simon Schama details the story of the Jewish people, spanning from their expulsion from Spain in the Inquisition across six hundred years to the present day.

It is a story like no other: an epic of endurance against destruction, of creativity in the face of oppression, joy amidst grief, the affirmation of life against the steepest of odds.

It spans the centuries and the continents--from the Iberian Peninsula and the collapse of “the golden age” to the shtetls of Russia to the dusty streets of infant Hollywood. Its voices ring loud and clear, from the philosophical musings of Spinoza to the poetry written on slips of paper in concentraion camps. Within these pages, the Enlightenment unfolds, a great diaspora transforms a country, a Viennese psychaiatrist forever changes the conception of the human mind.

And a great story unfolds. Not--as often imagined--of a culture apart, but of a Jewish world immersed in and imprinted by the peoples among whom they have dwelled, from the Egyptians to the Greeks, from the Arabs to the Christians, from the Soviets to America.

Which makes the story of the Jews everyone’s story, too.

Simon Schama is University Professor of Art History and History at Columbia University in New York. His award-winning books include Scribble, Scribble, Scribble; The American Future: A History; National Book Critics Circle Award winner Rough Crossings; The Power of Art; The Embarrassment of Riches: An Interpretation of Dutch Culture in the Golden Age; Citizens: A Chronicle of the French Revolution; Dead Certainties (Unwarranted Speculations); Landscape and Memory; Rembrandt's Eyes; and the History of Britain trilogy. He has written and presented forty television documentary films for the BBC, PBS, and The History Channel, including the Emmy-winning Power of Art, on subjects that range from John Donne to Tolstoy.

“An engaging and electrifying read by a skilled literary craftsman, cultural historian and tour guide . . . Schama enchants his readers by introducing colorful characters worthy of a Charles Dickens novel... The Story of the Jews dazzles with the art and alchemy of an adventure novel.” — Washington Post

“A technicolor blockbuster.” — The Spectator (U.K)

“Remarkable… [a] glittering gemstone of a book.” — The Times (UK)

“A magnificent achievement.” — The Guardian

“Magisterial...Wonderfully rich...Superb...In the company of Schama -- one of the finest writers and thinkers of his generation -- we are guaranteed a guide both insightful and eloquent.” — Daily Telegraph (London)

“Magisterial... With astonishing range and extraordinary synthesising powers, Schama captures the drama of Jewish History.... Between the poles of their regular, unannounced acculturation and anti-Semitism lay Jewish life in all its vibrant, messy and colourful forms.” — Financial Times

“Schama is a remarkable storyteller. His approach is cinematic. . .  A riveting picture, generously rendered . . . Schama has made an eloquent and a far-reaching case for why Jews needed a small piece of earth they could call home.” — New York Times Book Review