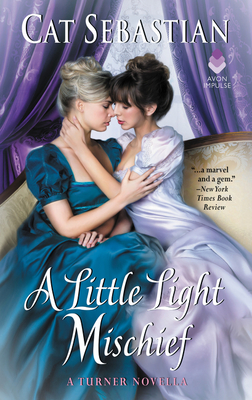 Lady’s maid Molly Wilkins is done with thieving—and cheating and stabbing and all the rest of it. She’s determined to keep her hands to herself, so she really shouldn’t be tempted to seduce her employer’s prim and proper companion, Alice. But how can she resist when Alice can’t seem to keep her eyes off Molly?

Finds her own heart

For the first time in her life, Alice Stapleton has absolutely nothing to do. The only thing that seems to occupy her thoughts is a lady’s maid with a sharp tongue and a beautiful mouth. Her determination to know Molly’s secrets has her behaving in ways she never imagined as she begins to fall for the impertinent woman.

When an unwelcome specter from Alice’s past shows up unexpectedly at a house party, Molly volunteers to help the only way she knows how: with a little bit of mischief.

Cat Sebastian has written sixteen queer historical romances. Cat’s books have received starred reviews from Kirkus, Publishers Weekly, Library Journal, and Booklist. Before writing, Cat was a lawyer and a teacher and did a variety of other jobs she liked much less than she enjoys writing happy endings for queer people. She was born in New Jersey and lived in New York and Arizona before settling down in a swampy part of south. When she isn’t writing, she’s probably reading, having one-sided conversations with her dog, or doing the crossword puzzle.

“Sebastian crafts another enormously fun, sexy romp that is also touching, with two heroines who make each other better together than they were alone. This latest entry in the “Turner” series stands on its own and will make readers wish for more about the winsome duo. Highly recommended.” — Library Journal (starred review)

On Unmasked by the Marquess: “This book is a marvel and a gem.” — New York Times Book Review

On Unmasked by the Marquess: “the conflict is utterly new and refreshing for the genre… Sebastian masters the plotting and emotions of an individual coming to grips with her gender queer identity, while also not falling into the trap of melodrama or maudlin after-school special. ” — Entertainment Weekly

On The Soldier’s Scoundrel: “Cat Sebastian sets a beautiful romance against a compelling story of blackmail, scandal and the impossibility of happily-ever-after... a reminder that love holds such power over us all. — Washington Post

“This novel left our hearts bursting with happiness and it is a must-read for fans of historical romances.” — Bookish.com