I Am These Truths: A Memoir of Identity, Justice, and Living Between Worlds (Hardcover) 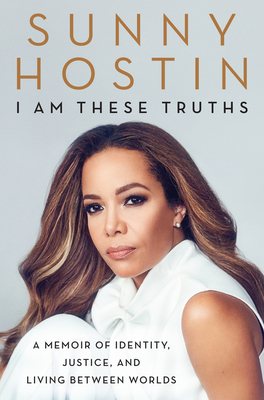 I Am These Truths: A Memoir of Identity, Justice, and Living Between Worlds (Hardcover)

The Emmy Award-winning legal journalist and co-host of The View Sunny Hostin chronicles her journey from growing up in a South Bronx housing project to becoming an assistant U.S. attorney and journalist in this powerful memoir that offers an intimate and unique look at identity, intolerance, and injustice.

“What are you?” has followed Sunny Hostin from the beginning of her story, as she grew up half Puerto Rican and half African-American raised by teenage parents in the South Bronx. Escaping poverty and the turbulence of her early life through hard work, a bit of luck and earning academic scholarships to college and law school, Sunny immersed herself in the workings of the criminal justice system. In Washington, D.C., Sunny became a federal prosecutor, soon parlaying her wealth of knowledge of the legal system into a successful career as a legal journalist. She was one of the first national reporters to cover Trayvon Martin’s death—which her producers erroneously labeled “just a local story.”

Today, an inescapable voice from the top echelons of news and entertainment, Sunny uses her platform to advocate for social justice and give a voice to the marginalized. In her signature no-holds-barred, straight-up style, Sunny opens up and shares her intimate struggles with fertility and personal turmoil, and reflects on the high-stakes cases and stories she worked on as a prosecutor and during her time at CNN, Fox News, ABC and The View. Timely, poignant, and moving, I Am These Truths is the story of a woman living between two worlds, and learning to bridge them together to fight for what’s right.

SUNNY HOSTIN is the 3-time Emmy Award-winning legal journalist, New York Times bestselling author, and co-host of The View. On May 4, Hostin released her debut novel, Summer on the Bluffs (William Morrow), which skyrocketed to #11 on the New York Times Bestseller List, the first book in her "Summer" trilogy. Last fall, Hostin released her memoir, I Am These Truths: A Memoir of Identity, Justice, and Living Between Worlds, with HarperOne. Hostin has been featured in the New York Times, the Wall Street Journal, Forbes Woman, Essence, Newsweek, the New York Post, Latina, and Ebony. A sought-after public speaker, she has delivered a TEDxTalk called “A Possibility Model” and spoken at and moderated panels for the U.C. Berkeley Graduate School of Journalism, Corporate Counsel Women of Color, and the National Bar Association, and served as a witness at the Federal Judiciary’s Congressional Hearing for the Public’s Right of Access to the Courts. Hostin lives with her husband and two children in New York.

Charisse Jones is a national correspondent for USA Today. A former staff writer for the New York Times and the Los Angeles Times, she has been a commentator for National Public Radio and is a contributing writer for Essence magazine.

“I always thought I was drawn to Sunny because of our similar backgrounds. But through her book I realize it’s because we’re both chameleons who are just trying to fit in. Thank you Sunny for writing a book that can teach even a know it all like me something new and invaluable.” — Don Lemon, CNN News Anchor

“Sunny Hostin is an inspiring person, and her story is rich with insights into the different worlds and identities she has navigated. There is much to learn from I Am These Truths—for anyone seeking to understand those worlds, and anyone looking to translate life’s challenges and complexities into a fierce commitment to justice.” — Ronan Farrow, author of Catch and Kill: Lies, Spies, and a Conspiracy to Protect Predators