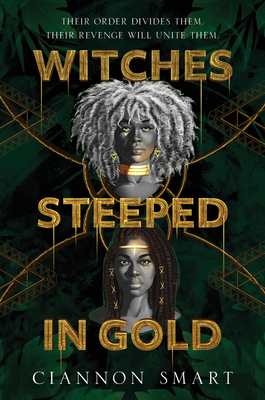 This Jamaican-inspired fantasy debut about two enemy witches who must enter into a deadly alliance to take down a common enemy has the twisted cat-and-mouse of Killing Eve with the richly imagined fantasy world of Furyborn and Ember in the Ashes.

Iraya has spent her life in a cell, but every day brings her closer to freedom—and vengeance.

Jazmyne is the Queen’s daughter, but unlike her sister before her, she has no intention of dying to strengthen her mother’s power.

Sworn enemies, these two witches enter a precarious alliance to take down a mutual threat. But power is intoxicating, revenge is a bloody pursuit, and nothing is certain—except the lengths they will go to win this game.

"A thundering waterfall of magic, vengeance and intrigue." —Samantha Shannon, New York Times & Sunday Times bestselling author of The Priory of the Orange Tree and The Bone Season.

Ciannon Smart can typically be found painting abstract canvases, playing netball, or teaching herself new scores on the piano. Witches Steeped in Gold is her first novel. You can learn more about Ciannon at www.ciannonsmart.com.

"Aglow with detail, Witches Steeped in Gold is a thundering waterfall of magic, vengeance and intrigue. Smart spirits the reader straight to the heart of a vivid and perilous world, where power rests in the hands of women and fate turns on the bonds they break and forge." — Samantha Shannon, New York Times & Sunday Times bestselling author of THE BONE SEASON & THE PRIORY OF THE ORANGE TREE

“A bloody and deadly delight, Witches Steeped In Gold puts power into the hands of Black girls — the true, beating heart of magic!”

“This delightfully delicious tale of witches and magical intrigue will have you reading late into the night.” — Rena Barron, author of Kingdom of Souls