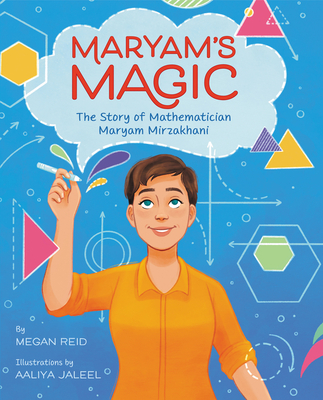 From Althea Gibson author Megan Reid and rising star artist Aaliya Jaleel, illustrator of Under My Hijab, comes the first picture book about trailblazing mathematician Maryam Mirzakhani, the first woman to win the world’s most prestigious honor in mathematics. Perfect for fans of Hidden Figures and Mae Among the Stars.

As a little girl, Maryam Mirzakhani was spellbound by stories. She loved reading in Tehran’s crowded bookstores, and at home she'd spend hours crafting her own tales on giant rolls of paper.

Maryam loved school, especially her classes in reading and writing. But she did not like math. Numbers were nowhere near as interesting as the bold, adventurous characters she found in books. Until Maryam unexpectedly discovered a new genre of storytelling: In geometry, numbers became shapes, each with its own fascinating personality—making every equation a brilliant story waiting to be told.

As an adult, Maryam became a professor, inventing new formulas to solve some of math's most complicated puzzles. And she made history by becoming the first woman—and the first Iranian—to win the Fields Medal, mathematics’ highest award.

Maryam's Magic is the true story of a girl whose creativity and love of stories helped her—and the world—to see math in a new and inspiring way.

Megan Reid works in books and television. She’s lived in seven states and two countries, but now she’s happy to be based in New York with her dog, Luna. Meg is also the author of Althea Gibson: The Story of Tennis’ Fleet-of-Foot Girl. You can visit her online at www.meganreid.co.

Aaliya Jaleel is a freelance illustrator, designer, and visual development artist, currently majoring in animation at the University of Texas at Dallas. She is the illustrator of Maryam’s Magic: The Story of Mathematician Maryam Mirzakhani, Under My Hijab, and Muslim Girls Rise. You can visit her online at www.aaliyamj.com.

“Jaleel’s soft cartoons pair well with Reid’s words, reinforcing that Maryam was not just a math genius, but someone who loved books and used stories to solve tough problems….Highlighting an important figure, this book also demonstrates that one can excel in more than one field.”
— Kirkus Reviews

“An inspiring life story and worthwhile addition for any library looking to enhance its collection of STEAM titles or biographies of noteworthy women from the Middle East.”
— School Library Journal

“A rewarding picture-book biography.”
— ALA Booklist