Battlegrounds: The Fight to Defend the Free World (Hardcover) 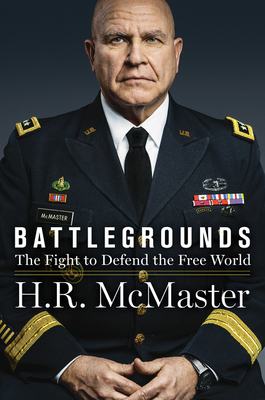 Battlegrounds: The Fight to Defend the Free World (Hardcover)

Now with new text from McMaster addressing the January 2021 assault on the U.S. Capitol and recommending how citizens across the free world can work together to restore confidence in democratic institutions and processes

From Lt. General H.R. McMaster, U.S. Army, ret., the former National Security Advisor and author of the bestselling classic Dereliction of Duty, comes a bold and provocative re-examination of the most critical foreign policy and national security challenges that face the United States, and an urgent call to compete to preserve America’s standing and security.

Across multiple administrations since the end of the Cold War, American foreign policy has been misconceived, inconsistent, and poorly implemented. As a result, America and the free world have fallen behind rivals in power and influence. Meanwhile threats to security, freedom, and prosperity, such as nuclear proliferation and jihadist terrorism have grown. In BATTLEGROUNDS, H.R. McMaster describes efforts to reassess and fundamentally shift policies while he was National Security Advisor. And he provides a clear pathway forward to improve strategic competence and prevail in complex competitions against our adversaries.

Battlegrounds is a groundbreaking reassessment of America’s place in the world, drawing from McMaster’s long engagement with these issues, including 34 years of service in the U.S. Army with multiple tours of duty in battlegrounds overseas and his 13 months as National Security Advisor in the Trump White House. It is also a powerful call for Americans and citizens of the free world to transcend the vitriol of partisan political discourse, better educate themselves about the most significant challenges to national and international security and work together to secure peace and prosperity for future generations.

H. R. McMaster is the Fouad and Michelle Ajami Senior Fellow at the Hoover Institution and Stanford University. He is also the Susan and Bernard Liautaud Fellow at The Freeman Spogli Institute and Lecturer at the Stanford Graduate School of Business. He serves as chairman of the advisory board of the Center on Military and Political Power at the Foundation for Defense of Democracies and the Japan Chair at the Hudson Institute. A native of Philadelphia, H.R. graduated from the United States Military Academy in 1984. He served as a U.S. Army officer for thirty-four years and retired as a lieutenant general in 2018. He remained on active duty while serving as the twenty-sixth assistant to the president for national security affairs. He taught history at West Point and holds a PhD in history from the University of North Carolina at Chapel Hill.

“Dereliction of Duty was a devastating account of how the United States had a flawed decision-making process that was largely based on self-deception. In many ways, Battlegrounds is the sequel, seeking to ask the question of why — not whether — the United States, at another moment of protests in the streets and bitter partisan divides, is losing its ability to shape the world. . . . Battlegrounds is, at its heart, the McMaster strategic plan that might have come to fruition had he worked for a president who was interested in strategic plans.”  — New York Times Book Review

“With the kind of detail that reportedly caused Trump to sour on him, McMaster takes us on a tour of those parts of the world that, in his view, pose the greatest danger to the United States….Along the way, there are dense and often rich diversions into the history that shaped each place….McMaster has an erudite and confident voice, and is at his best when dissecting emerging trends such as Russia’s weaponization of disinformation and Xi Jinping’s increasing assertion of control over all aspects of Chinese life and use of technology to shape events beyond China’s borders.” — Washington Post

"[Battlegrounds] is not a dramatic tell-all documenting [McMaster's] 13 months in the White House. McMaster said he had no desire to write another "palace intrigue" memoir. Instead, he offers a thoughtful critique of U.S. foreign policy and a restrained assessment of Trump’s approach to North Korea, Afghanistan and other global hotspots.  — USA Today

"Indeed, in my judgment, this is the best recent book on the national-security threats facing the United States of America and on what we should do about them. Anyone who wants to know more about these challenges should take the opportunity to learn at the feet of this warrior-scholar who has devoted his life to making America safer." — National Review

“A lively memoir of McMaster's time in office, and a scholarly, engaging history and deep analysis of the wide range of national security threats that face the United States and its allies.” — CNN.com

"McMaster, unlike others who left the administration, has not written a new tell-all about the US president, but rather an important new book that lays out what US strategy can accomplish in the future. . . . McMaster's book is beautifully crafted, packed with information." — Jerusalem Post

“(McMaster) stresses the need to know more about a complex world of actors who, as it turns out, do not think as we do or share our world view. He devotes the bulk of his book to a tour of the globe with an eye out for the parts most fraught — now, and in the foreseeable future. . . . It is, one suspects, the master in-depth briefing the author always wanted to give the president.” — NPR.org

“Two years after leaving the White House, former national security adviser H.R. McMaster is looking back at U.S. foreign policy since the end of the Cold War – and finds it deeply flawed. The reason? “Strategic narcissism,” an overly U.S.-centric worldview that has blinded American policymakers. Lieutenant General McMaster, a historian and highly decorated commander, examines that pattern in his wide-ranging new book, Battlegrounds. Overall, his goal is to inspire Americans to educate themselves about the world, and to strengthen U.S. “strategic empathy,” which he views as essential for foreign policy success.” — Christian Science Monitor

"Indispensable. . . . Battlegrounds provides a comprehensive and expert review of the strategic threats the US faced when the author was in the White House – not only the Chinese challenge but also Russia’s troublemaking everywhere from Syria to cyberspace, and the perennial North Korean and Iranian menaces.”
— Times Literary Supplement (London)

“There is plenty of criticism in the book of Trump policies.... but no juicy details of internal White House battles…. [McMaster] is trying to do something different, as we face a critical presidential election: criticize the foreign policy mistakes made by both Democrats and Republicans in recent decades and layout the elements of “a rational foreign policy.”….But there is one salient point McMaster makes repeatedly, that I think may be the most important. If we are to compete effectively with Moscow and Beijing, we must first address the partisan politics that are ripping our country apart.”  — Philadelphia Inquirer

"Battlegrounds provides a fascinating tour of current U.S. foreign policy challenges, region by region, beginning with Russia and China, followed by South Asia, the Middle East, Iran and North Korea. McMaster adds a chapter on security threats in outer space, cyber, and new technologies. Finally, he considers persistent difficulties in confronting all of these challenges. The tour is enlivened by his description of personal experiences overseas and within Washington, DC at the very highest level. This makes it one of the few indispensable books on the foreign policy of the current administration." — National Interest

"Battlegrounds is a fascinating exploration of the challenges facing America in the next four years and beyond. Successfully addressing these issues requires an honest assessment of what America can do, but more importantly an understanding of the issues on the ground, their history and geography, and a serious reconsideration of the underlying assumptions that have guided Washington’s approach across multiple administrations." — Diplomatic Courier

"McMaster carefully reviews the major foreign policy and national security challenges he encountered while he was National Security Adviser, unpacks their history, and dissects the legion of failings. It is eminently accessible and coherently presented. Ironically, the reader sees what a Trump-administration foreign policy could have looked like had the administration operated more traditionally, and had there been a functioning National Security Council." — Diplomatic Courier, Best Books of 2020

"As President Trump nears his Oval Office exit kicking and screaming, Americans of all partisan persuasions must rediscover the virtues—and the necessity—of political debate that is centered far more on actual issues and policies than on individuals and personalities. With the publication of Battlegrounds: The Fight to Defend the Free World, McMaster has provided American citizens with an essential tool for re-shouldering these burdens of self-government—learning the facts of weighty issues and pressing challenges, analyzing past mistakes, and thinking logically about the future of American foreign policy." — Merion West

"McMaster delivers a candid assessment of American national security policy over the past two decades in Battlegrounds. . . . Refusing to dabble in partisan politics or to confirm or deny personal opinions of Trump, he seeks to improve understanding of the most significant domestic and international challenges this country faces in the 21st century." — Army magazine

“The style and narrative is engaging and convincing, and successfully avoids both the impersonal tendency of a diplomatic history and the over-invested narrative of a true memoir. But unlike conventional history books or memoirs, the food for thought is not swathed in detail to the point where it is cryptic. It is served on a platter, a buffer for the incumbent or aspiring policy wonk.”
— Manara Magazine

“McMaster’s words ring even more true in the midst of a U.S. political transition that demonstrates how democracies can self-correct: ‘Citizens of free and open societies might cherish the freedoms and opportunities their forbears bequeathed them while acknowledging that no democracy or free-market economy is perfect and that all are works in progress.’” — Texas National Security Review