To Catch a Raven: Women Who Dare (Mass Market) 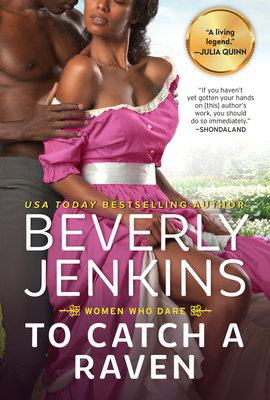 To Catch a Raven: Women Who Dare (Mass Market)

Lying and cheating may be sins to some people, but for Raven Moreaux, it is a way of life. She comes from a long line of grifters and couldn’t be prouder…Until she’s forced to help the government.

A former Confederate official is suspected of stealing the Declaration of Independence, and Raven, posing as his housekeeper, is tasked with getting it back. Her partner is the too handsome Braxton Steel. Masquerading as a valet/driver, Brax is also supposed to be her “husband.” He has his own reasons for doing this job, but when their pretend marriage ignites into fiery passion, they’ll have to put everything—including their hearts—on the line.

Beverly Jenkins is the recipient of the 2018 Michigan Author Award by the Michigan Library Association, the 2017 Romance Writers of America Lifetime Achievement Award, as well as the 2016 Romantic Times Reviewers’ Choice Award for historical romance. She has been nominated for the NAACP Image Award in Literature, was featured in both the documentary Love Between the Covers and on CBS Sunday Morning. Since the publication of Night Song in 1994, she has been leading the charge for inclusive romance, and has been a constant darling of reviewers, fans, and her peers alike, garnering accolades for her work from the likes of The Wall Street Journal, People Magazine, and NPR.

To read more about Beverly, visit her at www.BeverlyJenkins.net.

“Wild Rain will linger in your thoughts for its remarkably likable hero, spirited heroine, beautiful horses, scenery, adventure, and romance. It’s the kind of excellent storytelling that keeps us coming back for more, again and again from Beverly Jenkins.” — NPR

“This book has all the hallmarks of Jenkins’ fiction—meticulous historical research, a frank look at social conditions for Black people of the time, masterful pacing, and complex, likable characters…You shouldn’t miss it.” — Kirkus (starred review) on Wild Rain