Tubes: A Journey to the Center of the Internet with a New Introduction by the Author (Paperback) 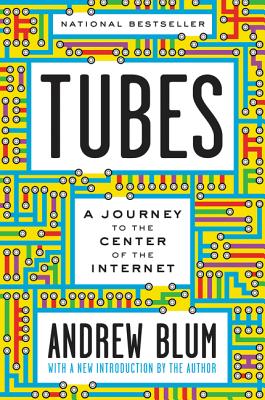 Tubes: A Journey to the Center of the Internet with a New Introduction by the Author (Paperback)

An engaging, narrative tour behind the scenes of our everyday lives to see the dark beating heart of the Internet itself.

We are all connected now. But connected to what, exactly? In Tubes, journalist Andrew Blum takes readers on a fascinating journey to find out.

When former Senator Ted Stevens of Alaska famously described the Internet as “a series of tubes,” he seemed hopelessly, foolishly trapped in an old way of knowing the world. But he wasn’t wrong. After all, as Blum writes, the Internet exists: for all the talk of the “placelessness” of our digital age, the Internet is as fixed in real, physical places as any railroad or telephone ever was. It fills enormous buildings, converges in some places and avoids others, and it flows through tubes under ground, up in the air, and under the oceans all over the world. You can map it, you can smell it, and you can even visit it—and that’s just what Blum does in Tubes.

From the room in Berkeley where the Internet flickered to life to the busiest streets in Manhattan as new fiber optic cable is laid down; from the coast of Portugal as a 10,000-mile undersea cable just two thumbs’ wide is laid down to connect Europe and West Africa to the wilds of the Pacific Northwest, where Google, Microsoft and Facebook have built monumental data centers—Blum visits them all to chronicle the dramatic story of the Internet’s development, explain how it all works, and capture the spirit of the place/

Like Tracy Kidder’s classic The Soul of a New Machine or Tom Vanderbilt’s recent bestseller Traffic, Tubes combines deep reporting and lucid explanation into an engaging quest to understand the everyday world we live in.

Andrew Blum is a journalist and the author of Tubes: A Journey to the Center of the Internet, the first book-length look at the physical infrastructure of the Internet. Tubes has been translated into ten languages, and has become a crucial reference for journalists, politicians, and entrepreneurs eager to understand how the Internet works. Blum’s writing about architecture, design, technology, urbanism, art, and travel has appeared in numerous publications, including Wired, Popular Science, Vanity Fair, and the New York Times.

“Every web site, every email, every instant message travels through real junctions in a real network of real cables. It’s all too awesome to behold. Andrew Blum’s fascinating book demystifies the earthly geography of this most ethereal terra incognita.” — Joshua Foer, bestselling author of Moonwalking with Einstein

“Quixotic and winning. . . . Valuable, comic. . . . [Blum has] a knack for bundling packets of data into memorable observations. What makes Tubes more than an unusual sort of travel book, is [Blum’s] sense of moral curiosity.” — New York Times

“Tubes is an absorbing tale of this new technology, as well as a wonderful account of the Internet’s growth and the people who made it possible.” — Science News

“Clever, enterprising . . . Tubes uncovers an Internet that resembles nothing so much as a fantastic steam-punk version of itself.” — Boston Globe

“Engaging. . . . Full of memorable images that make the internet’s complex architecture easier to comprehend. . . . Blum leaves readers pondering questions that would not have occurred to them before and better informed about an innovation most of us take for granted.” — The Guardian

“A charming look at the physical infrastructure that underlies the Web.” — Scientific American

“Fascinating and unique. . . . [A] captivating behind-the-scenes tour of how (and where) the Internet works. . . . [Blum] has a gift for breathing life into his subjects.” — Kirkus Reviews (starred review)

“A satisfying postmodern quest. . . . The history, in particular, is one of the best and most memorable I have ever read.” — New Scientist

“Blum paints a vivid picture of the Internet, and gives a sense that it is more than just the mysterious interstitial digital space between your computer and mine. It is, increasingly, the backbone that supports our daily life, and Mr. Blum is an able anatomist.” — New York Journal of Books

“Ingeniously beguiling. . . . Blum is a smart, imaginative, evocative writer who embraces the task of making his readers feel the wonder represented by these unprepossessing objects.” — Laura Miller, Salon

“An engaging reminder that, cyber-Utopianism aside, the internet is as much a thing of flesh and steel as any industrial-age lumber mill or factory. It is also an excellent introduction to the nuts and bolts of how exactly it all works.” — The Economist

“A fascinating exploration of the physical nature of the Internet, and how the ‘network of networks’ came to be the way it is.” — Shelf Awareness

“Enlightening. . . . A zippy history of a phenomenon that, as a society, captivates us, connects us, and vexes us.” — Guernica

“With infectious wonder, Blum introduces us to the Internet’s geeky wizards and takes us on an amiably guided tour of the world they’ve created, a world of wires and routers through which most of us daily wander . . . but which few of us have ever really seen.” — Donovan Hohn, author of Moby-Duck

“Compelling and profound. . . . For the first time, Tubes brings the ‘network of networks’ into stirring, and surprising, relief. You will never open an email in quite the same way again.” — Tom Vanderbilt, bestselling author of Traffic

“A compelling story of an altogether new realm where the virtual world meets the physical.” — Paul Goldberger, author of Why Architecture Matters

“At once funny, prosaic, sinister and wise . . . A beautifully written account of the true human cost of all our remote connectivity.” — Bella Bathurst, author of The Lighthouse Stevensons