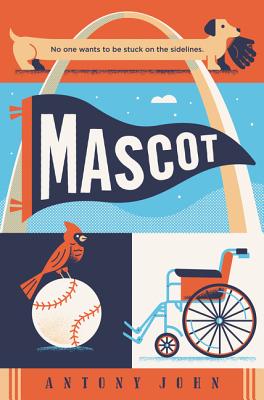 This witty, heartfelt story about perseverance in the face of adversity is perfect for fans of R. J. Palacio, Cammie McGovern, and John David Anderson.

Noah Savino has been stuck in a wheelchair for months. He hates the way people treat him like he’s helpless now. He’s sick of going to physical therapy, where he isn’t making any progress. He’s tired of not having control over his own body. And he misses playing baseball—but not as much as he misses his dad, who died in the car accident that paralyzed Noah.

Noah is scared he’ll never feel like his old self again. He doesn’t want people to think of him as different for the rest of his life. With the help of family and friends, he’ll have to throw off the mask he’s been hiding behind and face the fears that have kept him on the sidelines if he ever wants to move forward.

Antony John was born in England and raised on a balanced diet of fish and chips and bizarre British comedies. To annoy his parents, he studied classical music at university. Now he writes books instead of music so he can wear sweatpants all day. He lives in St. Louis with his family, who think he’s weird for not liking chocolate. They might be right. Visit him online at www.antonyjohn.net.
“The strength and beauty of this novel lie in the ways in which a community gathers around Noah. You’ll bawl at the ending, because it is so very real.”
— New York Times Book Review

“Mascot is the kind of book that makes me want to dress up in a costume and loudly tell the world about it.”
— Obert Skye, bestselling author of the Leven Thumps series

“Noah’s dilemma is universal: the struggle to rebuild identity when what once defined us no longer exists. Highlights the challenges of adapting to puberty and sudden disability at the same time.”
— Kirkus Reviews

“It is heartening to see young characters who don’t hesitate at their differences or care what other people think. As Noah comes to terms with his life-changing accident in this refreshingly fastpaced novel, readers will have an easy time cheering him on as he moves toward recovery.”
— Booklist

“The comedy balances accessibly with Noah’s grief, and readers will appreciate his return to the field.”
— Bulletin of the Center for Children’s Books

“John blends humor and heartache in this powerful, satisfying coming-of-age story that handles Noah’s experience of paraplegia with honesty and sensitivity.”
— Publishers Weekly
For This Book...
Staff Pick