It Takes Two to Tumble: Seducing the Sedgwicks (Mass Market) 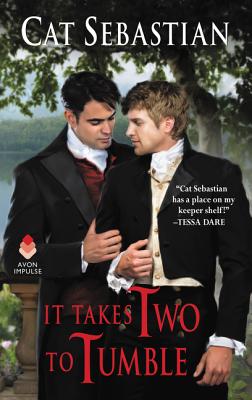 It Takes Two to Tumble: Seducing the Sedgwicks (Mass Market)

"Sebastian proves she is a new force to be reckoned with in historical romances.”--Booklist

Some of Ben Sedgwick’s favorite things:

After an unconventional upbringing, Ben is perfectly content with the quiet, predictable life of a country vicar, free of strife or turmoil. When he’s asked to look after an absent naval captain’s three wild children, he reluctantly agrees, but instantly falls for the hellions. And when their stern but gloriously handsome father arrives, Ben is tempted in ways that make him doubt everything.

Some of Phillip Dacre’s favorite things:

Phillip can’t wait to leave England’s shores and be back on his ship, away from the grief that haunts him. But his children have driven off a succession of governesses and tutors and he must set things right. The unexpected presence of the cheerful, adorable vicar sets his world on its head and now he can’t seem to live without Ben’s winning smiles or devastating kisses.

In the midst of runaway children, a plot to blackmail Ben’s family, and torturous nights of pleasure, Ben and Phillip must decide if a safe life is worth losing the one thing that makes them come alive.

Cat Sebastian has written sixteen queer historical romances. Cat’s books have received starred reviews from Kirkus, Publishers Weekly, Library Journal, and Booklist. Before writing, Cat was a lawyer and a teacher and did a variety of other jobs she liked much less than she enjoys writing happy endings for queer people. She was born in New Jersey and lived in New York and Arizona before settling down in a swampy part of south. When she isn’t writing, she’s probably reading, having one-sided conversations with her dog, or doing the crossword puzzle.

“Sebastian’s latest elegantly and eloquently written Regency historical... slowly unfolds into an unforgettable love story that manages to be both sweetly romantic and sizzlingly sensual at the same time, demonstrating once again why Sebastian is one of the brightest new stars in the romance genre.” — Booklist (starred review)

“The novel soars most in the moments where we see Phillip and Ben’s love propel them to find understanding with other members of their families... Sebastian’s latest checks all the boxes for a delightful winter read.” — Entertainment Weekly

“Fans of Regency romances and M/M pairings, here is your must-read for the month. The first book in Sebastian’s Seducing the Sedgwicks series has everything you want in a page-turning story.” — RT Book Reviews (top pick)

“This novel left our hearts bursting with happiness and it is a must-read for fans of historical romances.” — Bookish.com

“...there is something quicksilver and alive at the heart of this book that refuses to be pinned down to commonplace realism.” — The Seattle Review of Books