The Left-Handed Booksellers of London (Paperback) 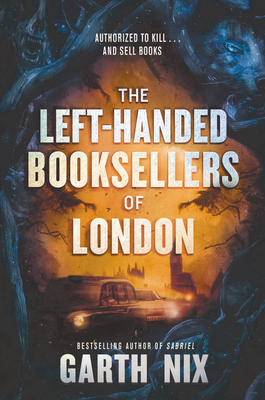 The Left-Handed Booksellers of London (Paperback)

“This is a fast-paced, rich, and entertaining read. The deep magic consumed my attention; I was in love with Merlin’s overflowing personality and Susan’s unflappable drive, and I had so much fun with the concept of booksellers who double as guardians against Old World magic. This book has a lot of crossover potential for audiences, between the high and urban fantasy and the accessibility for teen and adult readers alike. This is sure to be one of my top recommendations when it comes out. I love a good bookseller with a sword!”
— Breanna Spiegel, Boulder Book Store, Boulder, CO

A girl’s quest to find her father leads her to an extended family of magical fighting booksellers who police the mythical Old World of England when it intrudes on the modern world. From the bestselling master of teen fantasy, Garth Nix. Now available in paperback.

In a slightly alternate London in 1983, Susan Arkshaw is looking for her father, a man she has never met. Crime boss Frank Thringley might be able to help her, but Susan doesn’t get time to ask Frank any questions before he is turned to dust by the prick of a silver hatpin in the hands of the outrageously attractive Merlin.

Merlin is a young left-handed bookseller (one of the fighting ones), who with the right-handed booksellers (the intellectual ones), are an extended family of magical beings who police the mythic and legendary Old World when it intrudes on the modern world, in addition to running several bookshops.

Susan’s search for her father begins with her mother’s possibly misremembered or misspelt surnames, a reading room ticket, and a silver cigarette case engraved with something that might be a coat of arms.

Merlin has a quest of his own, to find the Old World entity who used ordinary criminals to kill his mother. As he and his sister, the right-handed bookseller Vivien, tread in the path of a botched or covered-up police investigation from years past, they find this quest strangely overlaps with Susan’s. Who or what was her father? Susan, Merlin, and Vivien must find out, as the Old World erupts dangerously into the New.

Garth Nix is a New York Times bestselling novelist and has been a full-time writer since 2001, but has also worked as a literary agent, marketing consultant, book editor, book publicist, book sales representative, bookseller, and as a part-time soldier in the Australian Army Reserve.

Garth’s many books include the Old Kingdom fantasy series, beginning with Sabriel and continuing to Goldenhand; the sci-fi novels Shade’s Children and A Confusion of Princes; the Regency romance with magic Newt’s Emerald; and novels for children including The Ragwitch, the Seventh Tower series, the Keys to the Kingdom series, and Frogkisser!, which is now in development as a feature film with Fox Animation/Blue Sky Studios. Garth has written numerous short stories, some of which are collected in Across the Wall and To Hold the Bridge. He has also cowritten several children’s book series with Sean Williams, including TroubleTwisters and Have Sword, Will Travel.

More than six million copies of his books have been sold around the world and his work has been translated into forty-two languages. You can find him online at www.garthnix.com.

"The worldbuilding is exquisite—the broad, immersive world and the specific rules for types of booksellers maintain a sense of discovery, and Susan and Merlin, the heroic protagonists, have vibrant, entertaining personalities (and a realistic romantic storyline). Readers will beg for more adventures in this London."
— Kirkus Reviews

"Nix wastes no time getting to the action, throwing readers headlong into the splendid new world alongside the bewildered but determined heroine. It’s an incredibly diverse, detailed, and . . .  Nix puts in enough twists to make it his own. A remarkable romp through a fantastical new world." — Booklist

"Nix’s latest offers a thrill-packed fantasy adventure. Strong world building is clearly informed by a deep knowledge of local mythologies, and the allusions, literary shoutouts, and pseudo-historical references become a game for the clued-in reader. Overall, this is a fresh, engaging fantasy with an old-school, nostalgic vibe." — Bulletin of the Center for Children’s Books

"As in his high-fantasy novels, Nix puts a strong, capable, and resourceful young woman front and center within a diverse cast [with] tropes from British spy stories. A thrilling, suspenseful romp with lots of humor and romantic tension; we haven’t seen the last of Susan and Merlin." — The Horn Book

A fantastic journey. Fans of Garth Nix's works should enjoy this exhilarating volume. Action, light romance and otherworldly machinations keep the tension flowing as Nix reveals a warm-hearted and clever fantasy. Readers will almost certainly leave this magical London searching for hints of the Old World peeking through our own. — Shelf Awareness

"A warm, whimsical delight—The Left-Handed Booksellers of London is a witty, clever adventure in an exquisitely detailed world you will love escaping into." — Veronica Roth, #1 New York Times bestselling author of the Divergent series, Carve the Mark series, The End and Other Beginnings, and Chosen Ones

“This is my favorite kind of tale, one where the magic and the real nest together like pages in a book. A delightful read.” — V.E. Schwab, #1 New York Times Bestselling author of the Shades of Magic series and the Monsters of Verity series

"A compelling magical romp, both familiar and inventive. These bookshops would be worth visiting at any time—but they feel like a special treat while I can’t set foot in a real one." — Molly Templeton, Tor.com

“Nix’s complex system of angelic magic, and the toll it takes, is fascinating, and he weaves an exciting adventure full of intrigue and action while portraying women in power in a refreshingly casual way. An original and gripping adventure.” — Kirkus Reviews (starred review)

“The vivid characters . . . jump off the pages. Their growing relationships steal the show. But there are plenty of embellishments that enhance the more personal aspects of the story. And kudos to fantasy stalwart Nix for a story with gender and racial equality.” — Booklist (starred review)

"A character-driven fantasy that still stays true its adventure roots [with] thoughtful, complex world building. Well-wrought differences in the character and voice of those teens . . . add nuance and depth to their racial diversity . . . [and] play on gendered expectations. Overall, this is a captivating and memorable tale that will please longstanding Nix fans and other lovers of intelligently written fantasy." — Bulletin of the Center for Children’s Books

"With their complementary personalities and easy affection, the four friends are an endearing, sibling-like group; Liliath makes a fascinating antagonist. In addition to its fantastical elements, Nix’s setting is characterized by wel­come gender equality, orientation inclusivity, and racial diversity." — Horn Book Magazine

“Fans will cheer this latest volumetightly paced with a satisfying resolution, capable and relatable female characters, plenty of action, and reappearances by beloved characters-and fervently hope for more to come.” — Horn Book Magazine

“Nix has included strong female characters and a no-nonsense approach to sexuality. Recommended for high school libraries and for readers looking for fantasy with a historical literary flair.” — School Library Journal

“There is no joy like returning to the Old Kingdom. Once again, Nix sets the standard for fantasy, bringing us a tale full of old friends and new enemies, gruesome monsters, and heroines of wit, will, and imagination.” — Leigh Bardugo, New York Times bestselling author of Six of Crows and The Grisha Trilogy

“Goldenhand reaffirms why Nix is a master of the genre: his exquisitely detailed world-building is unparalleled, and his characters are so tremendously alive and compelling that.” — Sarah J. Maas, author of the best-selling Throne of Glass series

“Garth Nix is one of the best worldbuilders in fantasy, and this book is merely further proof. I love the Old Kingdom series, and Goldenhand is an excellent continuation, packed with the excitement and passion of a storytelling virtuoso at the height of his abilities.” — Brandon Sanderson, New York Times bestselling author of the Mistborn trilogy, Warbreaker, The Alloy of Law, The Way of Kings, Rithmatist, and Steelheart.

Praise for CLARIEL:
“Between striking characters-from the heroic if not entirely competent young Abhorsen-in-Waiting, Belatiel, to the enigmatic, catlike Mogget-and Nix’s brilliantly complex magic system, this superb tale is exactly the book fans of the series have been awaiting.” — Publishers Weekly (starred review)

“Themes of freedom and destiny underpin Clariel’s harrowing, bittersweet story, and readers will delight in the telling (and in fan favorite Mogget’s return).” — Booklist (starred review)

“Clariel is a deeply sympathetic character faced with complicated choices, the consequences of which are frighteningly uncertain as she is pulled between the wild Free Magic and the disciplined Charter.” — School Library Journal (starred review)

“Nix’s tale provides a complete experience unto itself. But his focus on this strong character whose overriding passion is to go her own way provides a hugely satisfying background to the other Abhorsen books. A suspenseful prequel to the much-loved Abhorsen books, showcasing the independent Clariel.” — Shelf Awareness (starred review)

Praise for SABRIEL:  “Sabriel is a winner, a fantasy that reads like realism. Here is a world with the same solidity and four dimensional authority as our own, created with invention, clarity, and intelligence. I congratulate Garth Nix. And I look forward to reading his next piece of work.” — Philip Pullman, author of His Dark Materials trilogy

Praise for LIRAEL:  “What makes Lirael a delight is the magic that Nix brings to his story and to his characters.” — Publishers Weekly (starred review)

“At once an allegory regarding war and peace and a testament to friendship, this is thought-provoking fantasy.” — Publishers Weekly (starred review)

“A swashbuckling adventure with lashings of swordplay, dastardly intrigue, and the most original magic I’ve seen in years.” — Joe Abercrombie, bestselling author of the First Law Trilogy