Ten Things We Did (and Probably Shouldn't Have) (Paperback) 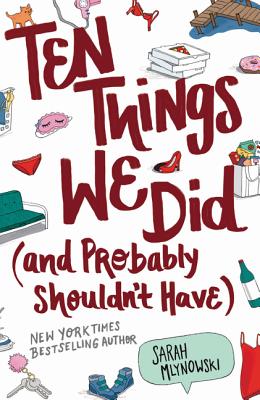 Ten Things We Did (and Probably Shouldn't Have) (Paperback)

Praised by New York Times bestselling author Lauren Myracle as “hilarious, moving and flat-out fun,” and Kirkus as a “pitch-perfect rendering...of the teen experience,” Ten Things I Did (and Probably Shouldn't Have) has captured the hearts of critics and readers alike.

Fans of Sarah Dessen, E. Lockhart, and Maureen Johnson will love this hilarious and heartwarming tale of a girl on her own for the first time.

If given the opportunity, what sixteen-year-old wouldn’t jump at the chance to move in with a friend and live parent-free? Although maybe “opportunity” isn’t the right word, since April had to tell her dad a tiny little untruth to make it happen (see #1: “Lied to Our Parents”). But she and her housemate Vi are totally responsible and able to take care of themselves. How they ended up “Skipping School” (#3), “Buying a Hot Tub” (#4), and, um, “Harboring a Fugitive” (#7) is a mystery to them.

To get through the year, April will have to juggle a love triangle, learn to do her own laundry, and accept that her carefully constructed world just might be falling apart...one thing-she-shouldn’t-have-done at a time.

Sarah Mlynowski is the bestselling author of Ten Things We Did (and Probably Shouldn’t Have); I See London, I See France; Don’t Even Think About It; Think Twice; Milkrun; Fishbowl; Bras & Broomsticks; the Whatever After series; and more. Her books have been translated into twenty-nine languages and optioned to Hollywood. Sarah was born in Montreal but now lives and writes in New York City. Visit her at www.sarahm.com and find her everywhere @sarahmlynowski.