The Relive Box and Other Stories (Hardcover) 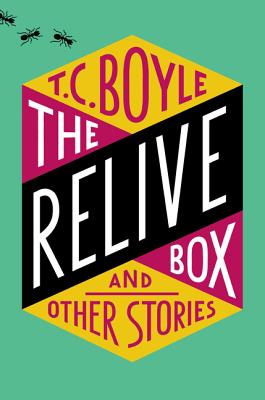 The Relive Box and Other Stories (Hardcover)


Special Order—Subject to Availability
While T.C. Boyle is known as one of our greatest American novelists, he is also an acknowledged master of the short story and is perhaps at his funniest, his most moving, and his most surprising in the short form. In The Relive Box, Boyle's sharp wit and rich imagination combine with a penetrating social consciousness to produce raucous, poignant, and expansive short stories defined by an inimitable voice. From the collection's title story, featuring a Halcom X1520 Relive Box that allows users to experience anew almost any moment from their past to "The Five-Pound Burrito," the tale of a man aiming to build the biggest burrito in town, the twelve stories in this collection speak to the humor, the pathos, and the struggle that is part of being human while relishing the whimsy of wordplay and the power of a story well told. In stories that span a variety of styles and genres, Boyle addresses the enduring concerns of the human mind and heart while taking on timely social concerns. The Relive Box is an exuberant, linguistically dazzling effort from a "vibrant sensibility fully engaged with American society." (The New York Times)

T.C. Boyle is an American novelist and short-story writer. Since the mid-1970s, he has published eighteen novels and twelve collections of short stories. He won the PEN/Faulkner Award in 1988 for his third novel, World’s End, and the Prix Médicis étranger (France) in 1995 for The Tortilla Curtain. His novel Drop City was a finalist for the 2003 National Book Award. Most recently, he has been the recipient of the Mark Twain American Voice in Literature Award, the Henry David Thoreau Prize, and the Jonathan Swift Prize for satire. He is a Distinguished Professor of English Emeritus at the University of Southern California and lives in Santa Barbara.

“Boyle makes the incredible credible through detail, and his narrative voices convincing through rhythm and attitude. He can be funny, touching, or both.” — Publishers Weekly

“...A timely collection that explores the decline of nature and the takeover of technology. . . . Boyle is a master mood-mixer, and this funny-scary-sad collection is filled with stories to be savored.” — BookPage