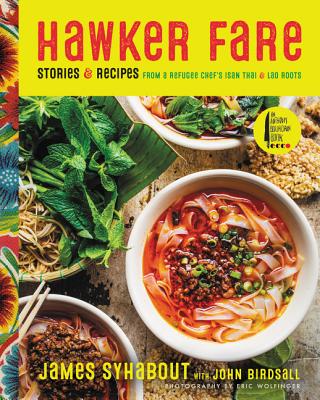 From chef James Syhabout of two–Michelin-star restaurant Commis, an Asian-American cookbook like no other—simple recipes for cooking home-style Thai and Lao dishes

James Syhabout’s hugely popular Hawker Fare restaurant in San Francisco is the product of his unique family history and diverse career experience. Born into two distinct but related Asian cultures—from his mother’s ancestral village in Isan, Thailand’s northeast region, and his father’s home in Pakse, Laos—he and his family landed in Oakland in 1981 in a community of other refugees from the Vietnam War. Syhabout at first turned away from the food of his heritage to work in Europe and become a classically trained chef.

After the success of Commis, his fine dining restaurant and the only Michelin-starred eatery in Oakland, Syhabout realized something was missing—and that something was Hawker Fare, and cooking the food of his childhood. The Hawker Fare cookbook immortalizes these widely beloved dishes, which are inspired by the open-air “hawker” markets of Thailand and Laos as well as the fine-dining sensibilities of James’s career beginnings. Each chapter opens with stories from Syhabout’s roving career, starting with his mother’s work as a line cook in Oakland, and moving into the turning point of his culinary life, including his travels as an adult in his parents’ homelands.

From building a pantry with sauces and oils, to making staples like sticky rice and padaek, to Syhabout’s recipe for instant ramen noodles with poached egg, Hawker Fare explores the many dimensions of this singular chef’s cooking and ethos on ingredients, family, and eating well. This cookbook offers a new definition of what it means to be making food in America, in the full and vibrant colors of Thailand, Laos, and California.

James Syhabout was born in northeast Thailand and grew up in Oakland. He graduated from the California Culinary Academy in 1999 and became chef de cuisine at Manresa with David Kinch. Along the way he worked in some of the best kitchens in the world, including at The Fat Duck and Daniel Patterson’s Coi, and spent a season at El Bulli. In 2009 he opened his first restaurant, Oakland’s Commis, which holds two Michelin stars. He opened Hawker Fare in Oakland in 2011 and in San Francisco in 2015. He’s also co-owner of Old Kan Beer and Co. and the founder of Hawking Bird, both in Oakland.

John Birdsall is a food writer and ex–restaurant cook who lives in Oakland. He’s received two James Beard Awards for food and culture writing, and is currently working on a new biography of James Beard.

“[An] outstanding debut...Mouthwatering...This is an eye-opening guide to a little-known cuisine.”
— Publishers Weekly (starred review)