Odd and the Frost Giants (Hardcover) 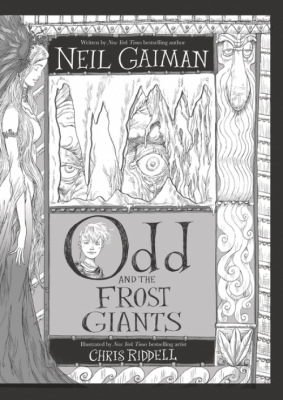 Odd and the Frost Giants (Hardcover)

“In a village in ancient Norway, Odd loses his father and has a terrible accident, which shatters his leg. When winter comes, Odd removes himself to the woods only to be confronted by three animals -- a bear, a fox, and an eagle -- who set the stage for a real twist of Norse mythology. This is a wonderful story!”
— Judith Lafitte, Octavia Books, LLC, New Orleans, LA

A beautifully illustrated edition of the thrilling, wintry Nordic tale by Neil Gaiman and Chris Riddell, who together weave a truly magical story of legend and adventure that will grip and enchant readers from beginning to end.

Odd, a young Viking boy, is left fatherless following a raid. In his icy, ancient world there is no mercy for an unlucky soul with a crushed foot and no one to protect him. Fleeing to the woods, Odd stumbles upon and releases a trapped bear…and then Odd's destiny begins to change.

The eagle, bear, and fox Odd encounters are Norse gods, trapped in animal form by the evil frost giant who has conquered Asgard, the city of the gods. Now our hero must reclaim Thor's hammer, outwit the frost giants and release the gods…

First published in 2009, Odd and the Frost Giants has been reimagined by acclaimed artist Chris Riddell in the style of his epic black-and-white artwork from New York Times bestselling The Sleeper and the Spindle, enhanced here with metallic silver ink.

Neil Gaiman is a #1 New York Times bestselling author of books for children and adults whose award-winning titles include Norse Mythology, American Gods, The Graveyard Book, Good Omens (with Terry Pratchett), Coraline, and The Sandman graphic novels. Neil Gaiman is a Goodwill Ambassador for UNHCR and Professor in the Arts at Bard College.

Chris Riddell is an acclaimed British artist who lives in Brighton, England. He has written and illustrated many books of his own, including Ottoline and the Yellow Cat and Ottoline Goes to School, and has illustrated, for Bloomsbury UK, The Graveyard Book; Coraline; and Fortunately, the Milk; as well as The Sleeper and the Spindle.

A rare tale that values brains over brawn--light, bright, and handsomely tricked out. — Kirkus Reviews