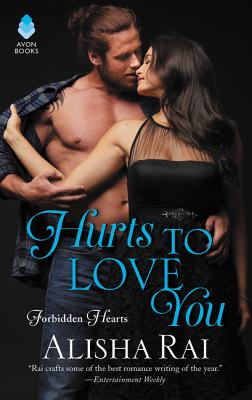 This is book number 3 in the Forbidden Hearts series.

Well-behaved women don’t lust after men who love to misbehave.

Heiress Evangeline Chandler knows how to keep a secret . . . like her life-long crush on the tattooed hottie who just happens to be her big brother’s friend. She’s a Chandler, after all, and Chandlers don’t hook up with the help. Then again, they also don’t disobey their fathers and quit their respectable jobs, so good-girl rules may no longer apply.

Gabriel Hunter hides the pain of his past behind a smile, but he can’t hide his sudden attraction to his friend’s sheltered little sister. Eve is far too sweet to accept anything less than forever and there’s no chance of a future between the son of a housekeeper and the town’s resident princess.

When a wedding party forces Eve and Gabe into tight quarters, keeping their hands off each other will be as hard as keeping their clothes on. The need that draws them together is stronger than the forces that should shove them apart . . . but their sparks may not survive the explosion when long-buried secrets are finally unearthed.

Alisha Rai pens award-winning contemporary romances and her novels have been named Best Books of the Year by Washington Post, NPR, Amazon, Entertainment Weekly, Kirkus, and Cosmopolitan Magazine. When she’s not writing, Alisha is traveling or tweeting. To find out more about her books or to sign up for her newsletter, visit www.alisharai.com.

“The only thing more romantic than a wedding is the long-awaited consummation of love between two favorite characters in a series, and the enjoyable third installment to Rai’s Forbidden Hearts contemporary series serves up both... True to Rai’s style, family secrets and surprises add complexity to this strong story about how wealth and privilege can do as much to destroy happiness as to facilitate it.” — Publishers Weekly