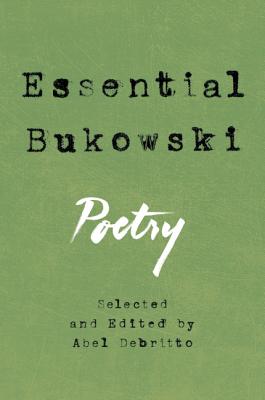 Edited by Abel Debritto, the definitive collection of poems from an influential writer whose transgressive legacy and raw, funny, and acutely observant writing has left an enduring mark on modern culture.

Few writers have so brilliantly and poignantly conjured the desperation and absurdity of ordinary life as Charles Bukowski. Resonant with his powerful, perceptive voice, his visceral, hilarious, and transcendent poetry speaks to us as forcefully today as when it was written. Encompassing a wide range of subjects—from love to death and sex to writing—Bukowski’s unvarnished and self-deprecating verse illuminates the deepest and most enduring concerns of the human condition while remaining sharply aware of the day to day.

With his acute eye for the ridiculous and the troubled, Bukowski speaks to the deepest longings and strangest predilections of the human experience. Gloomy yet hopeful, this is tough, unrelenting poetry touched by grace.

This is Essential Bukowski.

Charles Bukowski is one of America’s best-known contemporary writers of poetry and prose and, many would claim, its most influential and imitated poet. He was born in 1920 in Andernach, Germany, to an American soldier father and a German mother, and brought to the United States at the age of two. He was raised in Los Angeles and lived there for over fifty years. He died in San Pedro, California, on March 9, 1994, at the age of seventy-three, shortly after completing his last novel, Pulp.

Abel Debritto, a former Fulbright scholar and current Marie Curie fellow, works in the digital humanities. He is the author of Charles Bukowski, King of the Underground, and the editor of the Bukowski collections On Writing, On Cats, and On Love.