Just the Funny Parts: … And a Few Hard Truths About Sneaking into the Hollywood Boys' Club (Hardcover) 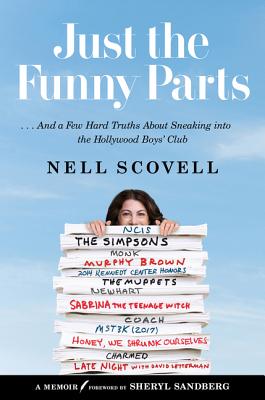 Just the Funny Parts: … And a Few Hard Truths About Sneaking into the Hollywood Boys' Club (Hardcover)

Just the Funny Parts is a juicy and scathingly funny insider look at how pop culture gets made. For more than thirty years, writer, producer and director Nell Scovell worked behind the scenes of iconic TV shows, including The Simpsons, Late Night with David Letterman, Murphy Brown, NCIS, The Muppets, and Sabrina, the Teenage Witch, which she created and executive produced.

In 2009, Scovell gave up her behind-the-scenes status when the David Letterman sex scandal broke. Only the second woman ever to write for his show, Scovell used the moment to publicly call out the lack of gender diversity in late-night TV writers’ rooms. “One of the boys” came out hard for “all of the girls.” Her criticisms fueled a cultural debate. Two years later, Scovell was collaborating with Sheryl Sandberg on speeches and later on Lean In, which resulted in a worldwide movement.

Now Scovell is opening up with this fun, honest, and often shocking account. Scovell knows what it’s like to put words in the mouths of President Barack Obama, Mark Harmon, Candice Bergen, Bob Newhart, Conan O’Brien, Alyssa Milano, and Kermit the Frog, among many others. Through her eyes, you’ll sit in the Simpson writers’ room… stand on the Oscar red carpet… pin a tail on Miss Piggy…bond with Star Trek’s Leonard Nimoy… and experience a Stephen King-like encounter with Stephen King.

Just the Funny Parts is a fast-paced account of a nerdy girl from New England who fought her way to the top of the highly-competitive, male-dominated entertainment field. The book delivers invaluable insights into the creative process and tricks for navigating a difficult workplace. It's part memoir, part how-to, and part survival story. Or, as Scovell puts it, “It’s like Unbroken, but funnier and with slightly less torture.”

Nell Scovell is a television writer, producer, and director, She collaborated with Sheryl Sandberg on the #1 New York Times bestseller Lean In: Women, Work, and the Will to Lead. She is the creator of the television series Sabrina the Teenage Witch, and her TV writing credits include The Simpsons, Coach, Monk, Murphy Brown, Charmed, and NCIS. She has directed two movies for cable television and an episode of Awkward. She has contributed to SPY magazine, Vanity Fair, Vogue, and The New York Times.

She and her husband Colin Summers have two college-age sons. Despite Blue Oyster Cult’s well-reasoned arguments, she still fears the reaper.

“First things first. Just the Funny Parts is, like Nell Scovell herself, funny as hell. Laugh-out-loud chuckles, eye rolls, embarrassed (for Nell) giggles—it’s all there. But there’s a lot more, too. This is a smart, wise book about growing up, growing old(er), and most of all, what it means to be a woman in a man’s world. That’s no joke. (But it is, as I mentioned, funny.)” — Jeffrey Toobin, author of American Heiress

“Nell Scovell has finally written the book that everyone in the comedy world has been waiting for!  Besides being one of the funniest people I know, she has not just survived, but she has thrived. How the hell did she do it??  Crack it open and find out!” — Bette Midler

“This book is soooo good! Nell not only recalls her comedy writing career with wit but also transports us there to sit alongside her as witness. Just the Funny Parts could easily be called Just The Brave Parts.” — Larry Wilmore

“Nell is an incredible writer, and this book is just as amazing as I would expect. I particularly liked page 213.” — Samantha Bee, Full Frontal with Samantha Bee

“In Just the Funny Parts, Nell Scovell offers readers an unvarnished look into a writer’s life.  Through her unique lens, she bravely confronts some uncomfortable truths, and yet keeps you laughing the whole way through.” — George Lucas, yeah that George Lucas

“I’ve known for a while that Nell is an unusually talented and funny writer, but I had no idea just how much she shaped the TV that I’ve watched for decades—or how much bias she faced along the way. Despite that (and sometimes because of it), this book was a delight to read. It’s full of jokes that made me laugh and sharp analyses that made me think.” — Adam Grant, New York Times bestselling author of Give and Take and Originals, and co-author of Option B

“In this illuminating memoir, Scovell details her career as a highly successful television writer over the last three decades, during which she was usually the only woman in the room… Scovell has repeatedly felt the sting of toiling in Los Angeles, “where rejection and failure are the bread and butter of this gluten-free, nondairy town,” and in an industry that continually looked for a cheaper, younger version of her. But in working with Sheryl Sandberg as the co-writer on Lean In, she was reminded of a timeless lesson: doing something that is meaningful to oneself might also have an impact on others. Scovell’s memoir is wonderfully entertaining and ultimately uplifting.” — Publishers Weekly

“Scovell minces few words when skewering the toxic atmosphere for female talent in Hollywood….Her fearlessness was clearly evidenced when the David Letterman sex scandal broke and the author made a controversial and risky career move by speaking out about a marked lack of gender diversity in the late-night TV arena….A breezy, affably written amalgam of memoir, advice, and workplace survival guide from the front lines of the entertainment industry.” — Kirkus Reviews

“Get ready to laugh out loud as writer, producer, and director Nell Scovell takes you behind the scenes of your favorite comedic shows, including The Simpsons, Murphy Brown, Sabrina, the Teenage Witch, and more in her hilarious and heartfelt memoir about making it in the male-dominated world of entertainment. Sharp and insightful, Just the Funny Parts is an wild romp through the world of TV that is as entertaining as it is inspiring.” — Bustle

“An honest and demystifying glimpse into the world of men (and some women) behind the comedy curtain. Like Liz Lemon, Scovell is a wry and relatively grounded observer of the soaring self-regard and bottomless neediness that characterizes the professionally funny.” — Slate

“Scovell’s laugh-out-loud account of her struggles in the male-dominated world of TV is a worthy read. […] Scovell’s compelling story of her life, leavened with much good humor, lets readers know the Hollywood world judged her often as a “woman writer” when she was seeking to be known as a writer, yet she never gives up. For all readers interested in Hollywood and how it works.” — Library Journal