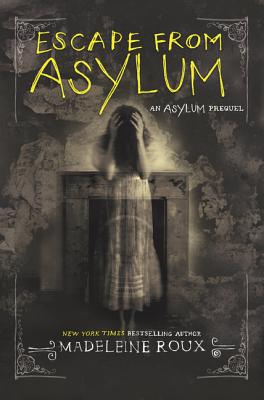 This is book number 4 in the Asylum series.

In this terrifying prequel novel to the New York Times bestselling Asylum series, a teen is wrongfully committed to the Brookline psychiatric hospital and must find a way out—before he becomes the next victim of the evil warden’s experiments.

With the page-turning suspense and unsettling found photographs from real asylums that led Publishers Weekly to call Asylum “a strong YA debut,” Escape from Asylum is perfect for fans of Miss Peregrine's Home for Peculiar Children.

The nightmare is just beginning.

Ricky Desmond has been through this all before. If he could just get through to his mother, he could convince her that he doesn’t belong at Brookline. From the man who thinks he can fly to the woman who killed her husband, the other patients are nothing like him; all he did was lose his temper just a little bit, just the once. But when Ricky is selected by the sinister Warden Crawford for a very special program—a program that the warden claims will not cure him but perfect him—Ricky realizes that he may not be able to wait for his mom a second longer. With the help of a sympathetic nurse and a fellow patient, Ricky needs to escape now.

Set long before Dan, Abby, and Jordan ever walked the hallways of the Brookline asylum—back when it was still a functioning psych ward and not a dorm—Escape from Asylum is a mind-bending and scary installment in the Asylum series that can stand on its own for new readers or provide missing puzzle pieces for series fans.

Madeleine Roux is the New York Times and USA Today bestselling author of the Asylum series, which has sold over a million copies worldwide. She is also the author of the House of Furies series, and several titles for adults, including Salvaged and Reclaimed. She has made contributions to Star Wars, World of Warcraft, and Dungeons & Dragons. Madeleine lives in Seattle, Washington with her partner and beloved pups.

“Roux’s use of found photographs, text messages, and excellent chapter hooks will keep readers up late, following the misadventures of the appealingly geeky honor students.” — Booklist

“With plentiful old photographs of carnival acts, Roux works the creepy verisimilitude that made Asylum such a page-turner. The haunted-house explorations are especially cinematic and spooky...Roux knows how to keep the action rolling and the reader hooked.” — Booklist

“Days after reading Asylum, I’m still haunted by the images that Madeleine Roux’s words conjured. I just want to curl up inside her skull and exist for a while in its dark, twisted magnificence. Brilliant!” — New York Times Bestselling Author Zac Brewer

“A strong YA debut. Roux (aided by unsettling photo illustrations of abandoned asylums and tormented patients) creates an entertaining and occasionally brutal horror story that reveals the enduring impact of buried trauma and terror on a place.” — Publishers Weekly

“The plentiful illustrations both advance the story line and immeasurably contribute to the spooky atmosphere. With its abundant jump scares, horror readers and fans of the TV show American Horror Story will delight in the fast-paced plot.” — Booklist

“Illustrations used in this book are from actual asylums, and the author builds the tension nicely as Dan receives what may be messages from an inmate. A good choice for readers who enjoy books with scary situations that lead to a solid climax.” — Voice of Youth Advocates (VOYA)

“Madeleine Roux’s Asylum takes the fondest dream of our collective nerdy childhood and handily turns it into the scariest collective nightmare.” — Tor.com

“I started reading this one at my desk in broad daylight and still got goose bumps.” — Glamour