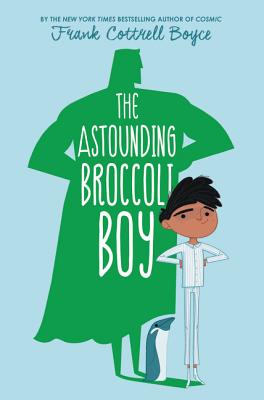 Rory Rooney likes to be prepared for anything. That sort of planning pays off when you’re the smallest kid in your class. Rory is even prepared (mostly) for Tommy-Lee, his nemesis, who starts most days by throwing Rory out of the back of the school bus. Don’t be scared, his favorite book says, be prepared. And Rory aims to be. What’s more heroic than that?

But Rory isn’t prepared when he suddenly and inexplicably turns green and finds himself stuck in an experimental hospital ward. The doctors are just as baffled as Rory is, and that’s when he begins to wonder: What if this isn’t caused by his genes, or a virus, or something he ate? What if it’s something even more extraordinary? After all, more than a few superheroes’ careers began when they turned green. Could this be a sign that he’s meant for something greater? Rory is going to find out—and that’s going to start with escaping from the hospital.

Frank Cottrell Boyce is the author of Sputnik's Guide to Life on Earth, The Astounding Broccoli Boy, Cosmic, Framed, and Millions, the last of which was a New York Times bestseller and was made into a movie by Oscar-winning director Danny Boyle. His books have won or been nominated for numerous awards, including the Carnegie Medal, the Guardian Children's Fiction Prize, and the Whitbread Children's Book Award. Frank is also a screenwriter, having penned the scripts for a number of feature films as well as the opening ceremony of the 2012 London Olympics. He lives in Liverpool with his family.

“Humorous and fast-paced, this distinctive tale with well-developed characters will appeal to those readers who have ever searched for their own superpowers.” — School Library Journal (starred review)

“Boyce provides readers with a fast-paced and hysterically funny adventure while also exploring the nature of fear, friendship, and family.” — Booklist (starred review)

“Cottrell Boyce, of Millions, mocks neurotic adults, the quinoa craze, and media fearmongering in this funny, sentimental, thematic smorgasbord of a novel that serves up equal helpings of satire and compassion.” — Kirkus Reviews

“Rory’s superhero conviction is . . . gently humorous, and the kids’ wild adventures through the city, culminating in an epic rescue at the top of the city’s famous Shard, are comedic and exhilarating. A solid original adventure.” — Bulletin of the Center for Children’s Books

“Boyce’s mash-up of comic-book tropes and coming-of-age struggles is funny. . . . Race, identity, individuality, courage, friendship—Boyce’s young heroes tackle these serious themes, too, offering up wise-beyond-their-years takeaways like: ‘The thing that makes you different from everyone else—that’s your superpower.’” — The Horn Book