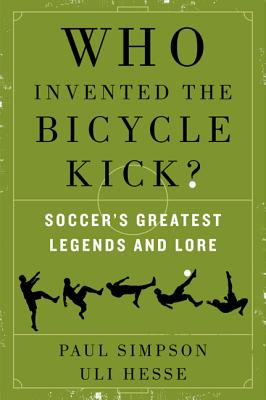 "Chock-full of nifty tidbits about the game we love.” — New York Times

Discover the ultimate collection of soccer’s greatest lore and legends, illustrated with 100 black-and-white photos, by two of the world’s most knowledgeable soccer journalists. Uli Hesse and editor Paul Simpson bring together the sublime feats, legendary personalities, neglected heroes, bizarre twists of fate, and fascinating mysteries that have shaped the world’s most popular game, including:

Who invented the bicycle kick?

Why does a football match last 90 minutes?

Who scored the fastest goal ever?

Which match produced the largest number of red cards?

Why are seven dead cats buried under a stadium in Argentina?

Which country was banned from the World Cup after refusing to play in shoes?

Providing answers to more than 100 questions, Hesse and Simpson explore the beautiful game as never before, shedding new light on legends such as Pele, Maradona, Messi, Beckham, Ronaldo, and Rooney, and uncovering lost histories of international clubs like Manchester United, Chelsea, Aston Villa, Real Madrid, Bayern Munich, and more. Challenging conventional wisdom, and destroying a few urban myths, Who Invented the Bicycle Kick? is a must for every soccer lover.

Paul Simpson is the editor of Champions, the official magazine of the UEFA Champions League. He was the launch editor of Four Two Four magazine.

Uli Hesse has written more than 300 articles for ESPN FC, America's most popular soccer website. He is the author of Tor!, the definitive history of German football.

“Perfect for a quick dip, in and out. … Chock-full of nifty tidbits about the game we love.”
— New York Times

“Simpson and Hesse shatter football myths. ... A mixture of tactical insight, number-crunching, and stories from the archives.”
— Sport Magazine

“Beautifully crafted . . . demolishes myths with the cold-blooded efficiency of a literary Gerd Muller.”
— The Times (London) on Tor!

“Wonderful for serious and casual soccer fans. … This book is fun. … Simpson and Hesse tackle the burning issues of the game.”
— Library Journal
For This Book...
Staff Pick