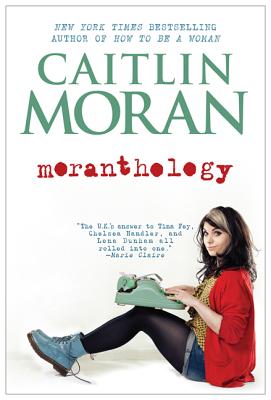 “Moran is a British journalist whose columns are known for covering a broad range of topics, from feminism and politics to fashion and TV. Some of those columns are reprinted in Moranifesto, a hilarious collection of opinion pieces that are Moran's personal manifesto for changing the world. The collection covers topics as diverse as the Syrian refugee crisis, cystitis, David Bowie, and why she no longer wears heels. As dissimilar as these themes may be, they are all tackled with the blunt humor for which Moran is known. Moranifesto is gloriously funny, feminist, and timely.”
— Agnes Galvin (E), Oblong Books And Music,LLC., Millerton, NY

The follow up to her bestselling breakout hit How to Be a Woman, Moranthology is a hilarious, insightful collection of Moran’s London Times columns that confirms her status as “the UK’s answer to Tina Fey, Chelsea Handler, and Lena Dunham all rolled into one.” (Marie Claire)

Possibly the only drawback about the bestselling How to Be a Woman was that its author, Caitlin Moran, was limited to pretty much one subject: being a woman. Moranthology is proof that Caitlin can actually be “quite chatty” about many other things, including cultural, social and political issues that are usually the province of learned professors, or hot-shot wonks—and not of a woman who once, as an experiment, put a wasp in a jar, and got it stoned.

Here you’ll find Caitlin ruminating on—and sometimes interviewing—subjects as varied as caffeine, Keith Richards, Ghostbusters, Twitter, the welfare state, the royal wedding, Lady Gaga, and her own mortality, to name just a few. With her “brilliant, original voice” (Publishers Weekly), Caitlin brings insight and humor to everything she writes.

Caitlin Moran’s debut book, How to Be a Woman, was an instant New York Times bestseller. Her first novel, How to Build a Girl, received widespread acclaim. She lives in London. You can follow Caitlin on Twitter: @caitlinmoran

“Caitlin Moran is not only hilarious, sharply intelligent and so much more than a ‘shit Dickens or Orwell, but with tits’; she is one of the most astute social commentators hitting a keyboard today.” — Abby O'Reilly, The Independent

“A brilliant follow-up to How to Be a Woman….If you are a fan of common sense, comic writing and pop culture, buy [Moranthology] immediately.” — Roisin Ingle, The Irish Times

“[Moran’s] skill as an interviewer lies not in the killer question but in the way she conveys being there and messing it up. She is gleeful and rueful and on the money.” — Claudia FitzHerbert, The Spectator

“Moranthology is a merry ramble on anything and everything. A diffuse collection allows Moran to show off her strengths: a broad range of interests, an almost canine enthusiasm, and a love of the world and its people that radiates from every page. — Malena Watrous, San Francisco Chronicle Book Review

“In Moranthology, a collection of [Moran’s] greatest hits, she has full rein to unleash a barrage of scorchingly funny and uncensored opinions on the rest of the known universe.” — Elissa Schappell, Vanity Fair Best Books of the Year

“Fans of Ms. Moran will be especially pleased that all the pith and wit about How to Be a Woman remain on display in Moranthology.” — Rachel Hurn, Wall Street Journal

“The truth will set you free, some say. In Moran’s case, it will make you guffaw… This witty and wise collection is sure to expand Moran’s fan base on this side of the pond.” — Allison Block, Booklist