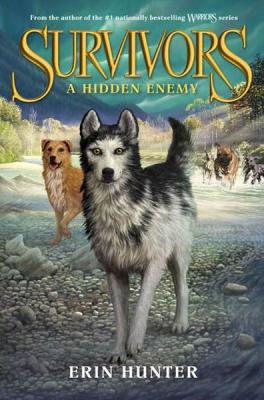 This is book number 2 in the Survivors series.

From Erin Hunter, #1 nationally bestselling author of Warriors, comes the New York Times bestselling second book in the Survivors series. Praised by Kirkus Reviews as “perfectly crafted” in a starred review, A Hidden Enemy is an action-packed adventure that will thrill fans of Spirit Animals and Wings of Fire.

After discovering a forest filled with prey and fresh water, Lucky and the Leashed Dogs are sure that they have found their new home. But a fierce pack of Wild Dogs has laid claim to the land and their menacing Alpha won’t allow other dogs to settle there. Now Lucky finds himself forced to go behind enemy lines—and to decide which dogs will ultimately be his true allies.

Erin Hunter is inspired by a love of cats and a fascination with the ferocity of the natural world. In addition to having great respect for nature in all its forms, Erin enjoys creating rich mythical explanations for animal behavior. She is also the author of the Seekers, Survivors, Bravelands, and Bamboo Kingdom series.

PRAISE FOR SURVIVORS: “Hunter expertly explores the tensions between responsibility and freedom; risk and safety; and loyalty and acceptance. Viewing the unfolding adventure through Lucky’s eyes makes even the most mundane or familiar seem alive with magic. Wild and wonderful adventure for middle-graders.” — Kirkus Reviews (starred review)