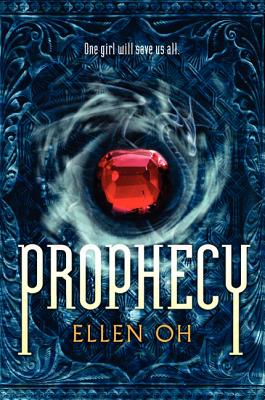 This is book number 1 in the Prophecy series.

For fans of bestselling author Marie Lu comes this heart-stopping first book in Ellen Oh’s trilogy about the greatest warrior in all of the Seven Kingdoms . . . a girl with yellow eyes. Intrigue and mystery, ancient lore and action-packed fantasy come together in this incredible debut!

Kira’s the only female in the king’s army, and she’s also the prince’s bodyguard. A demon slayer and an outcast, she’s hated by nearly everyone in her home city of Hansong. And she’s their only hope. . . .

Murdered kings and discovered traitors point to a demon invasion, sending Kira on the run with the young prince. He may be the savior predicted in the Dragon King’s prophecy, but the legendary lost ruby treasure just might be the true key to victory. With only the guidance of the cryptic prophecy, Kira must battle demon soldiers, an evil shaman, and the Demon Lord himself to find what was once lost, while raising a prince into a king.

is the cofounder of We Need Diverse Books and author of the award-winning Spirit Hunters series for middle grade readers and the Prophecy trilogy (Prophecy, Warrior, and King) for young adults. Originally from New York City, Ellen is a former adjunct college instructor and lawyer with an insatiable curiosity for ancient Asian history. Ellen lives in Bethesda, Maryland, with her husband and three children and has yet to satisfy her quest for a decent bagel. You can visit her online at www.ellenoh.com.

“Fans of Kristin Cashore’s Graceling will be drawn to the despised warrior princess; fans of Cindy Pon’s Silver Phoenix will love the setting.” — Kirkus Reviews

“This is a true adventure novel. The characters are well drawn, the plot is both well conceived and fast moving, and the ending is just satisfying enough, while still leaving readers ready for a sequel.” — School Library Journal

“Prophecy grabs you from the start and never lets go. Oh has written an exciting debut that promises more fantastic adventures to come.” — Cindy Pon, author of Silver Phoenix