With No One As Witness (A Lynley Novel #13) (Mass Market) 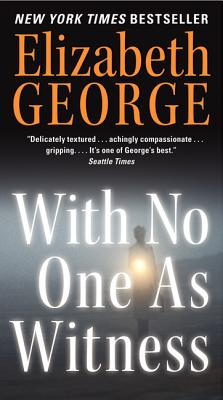 With No One As Witness (A Lynley Novel #13) (Mass Market)

This is book number 13 in the A Lynley Novel series.

“Delicately textured...achingly compassionate....It’s one of George’s best, and that’s saying something.”
—Seattle Times

The 13th novel in Elizabeth George’s acclaimed, New York Times bestselling Inspector Linley crime fiction series, With No One as Witness is arguably the most riveting, shocking, and emotionally compelling of the lot. The hunt for a serial killer who has been murdering and mutilating young boys in London has Scotland Yard Detective Superintendent Thomas Lynley and his team of investigators racing to stop the slaughter, only to have the investigation nearly derailed by one devastating, truly game changing event. An American author, George has been praised as “a master of the British mystery” by the New York Times, one of only two Yanks whose crime novels have been adapted for the PBS TV series, “Mystery,”  and her exceptional police procedurals rank with the best of Ian Rankin, Peter Robinson, and Ruth Rendell.

Elizabeth George is the New York Times bestselling author of sixteen novels of psychological suspense, one book of nonfiction, and two short story collections. Her work has been honored with the Anthony and Agatha awards, the Grand Prix de Littérature Policière, and the MIMI, Germany's prestigious prize for suspense fiction. She lives in Washington State.

“George fully develops every nuance of the racially loaded case--and every thrill in the chase. But it’s the note on which the novel ends that stuns as the series is violently wrenched onto new ground.” — Daily News (NY)

“Will keep readers on the edge of their seats.” — Bookreporter.com

“Delicately textured...achingly compassionate...gripping...it’s one of George’s best, and that’s saying something.” — Seattle Times

“This one grabs the reader all the way.” — Lisa Ko, author of The Leavers