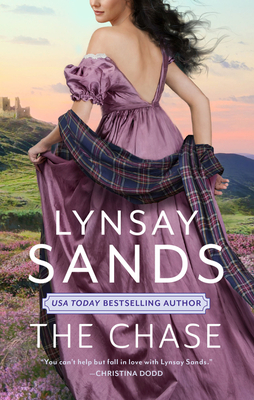 In this charming historical romance classic from New York Times bestselling author Lynsay Sands, a Highlands hellion flees the handsome “English devil” she’s been promised to, and he realizes that his enchanting prize will be much harder to win than he imagined.

Seonaid Dunbar had been trained as a Scottish warrior at her father's knee, and she would rather fight than flee. But running away to an abbey was preferable than marrying Blake Sherwell. No, she'd not dutifully pledge troth to anyone the English court called "Angel." Fair hair and eyes as blue as the heavens hardly proved a man's worth. There was no such thing as an English angel; only English devils. And there were many ways to elude a devilish suitor, even one that King Henry ordered her to wed.

The next Countess of Sherwell was not sitting at home in her castle, embroidering, peacefully waiting for Blake to arrive. No, she was fleeing to a new stronghold and readying her defenses. Swords and sleeping drafts, Claymores and kisses. This battle would require all weapons--if he ever caught her. And the chase was about to begin.

Lynsay Sands is the nationally bestselling author of the Argeneau/Rogue Hunter vampire series, as well as numerous historicals and anthologies. She’s been writing since grade school and considers herself incredibly lucky to be able to make a career out of it. Her hope is that readers can get away from their everyday stress through her stories, and if there are occasional uncontrollable fits of laughter, that’s just a big bonus. Please visit her on the web at www.lynsaysands.net.

“Sands delivers a rip-roaring adventure with plenty of steamy interludes... It’s hard to resist her witty dialogue, off-the-wall scenarios, sexy moments, and tongue-in-cheek sense of humor, all of which combine for a deliciously fun romp in this absolutely bonkers read.” — Entertainment Weekly

“You can’t help but fall in love with Lynsay Sands!” — Christina Dodd