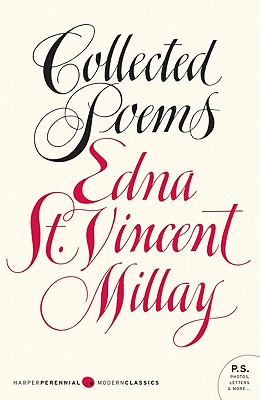 My candle burns at both ends; It will not last the night; But ah, my foes, and oh, my friends — It gives a lovely light!

The 1956 Collected Poems of Edna St. Vincent Millay finds new life in this beautiful edition from Harper Perennial Modern Classics. Alongside Robert Frost, T.S. Eliot, Marianne Moore, and E. E. Cummings, Millay remains among the most celebrated poets of the early twentieth century for her uniquely lyrical explorations of love, individuality, and artistic expression. This invaluable compendium of her work is not only an essential addition to any collection of the world’s most moving and memorable poetry but an unprecedented look into the life of Millay. An extensive P.S. section includes personal letters, never-before-seen photographs, information about Millay’s homestead at Steepletop, and an original essay by leading Millay scholar Holly Peppe.

Edna St. Vincent Millay was born in 1892 in Rockland, Maine, the eldest of three daughters, and was encouraged by her mother to develop her talents for music and poetry. Her long poem "Renascence" won critical attention in an anthology contest in 1912 and secured for her a patron who enabled her to go to Vassar College.

After graduating in 1917 she lived in Greenwich Village in New York for a few years, acting, writing satirical pieces for journals (usually under a pseudonym), and continuing to work at her poetry. She traveled in Europe throughout 1921-22 as a "foreign correspondent" for Vanity Fair. Her collection A Few Figs from Thistles (1920) gained her a reputation for hedonistic wit and cynicism, but her other collections (including the earlier Renascence and Other Poems [1917]) are without exception more seriously passionate or reflective.

In 1923 she married Eugene Boissevain and -- after further travel -- embarked on a series of reading tours which helped to consolidate her nationwide renown. From 1925 onwards she lived at Steepletop, a farmstead in Austerlitz, New York, where her husband protected her from all responsibilities except her creative work. Often involved in feminist or political causes (including the Sacco-Vanzetti case of 1927), she turned to writing anti-fascist propaganda poetry in 1940 and further damaged a reputation already in decline. In her last years of her life she became more withdrawn and isolated, and her health, which had never been robust, became increasingly poor.