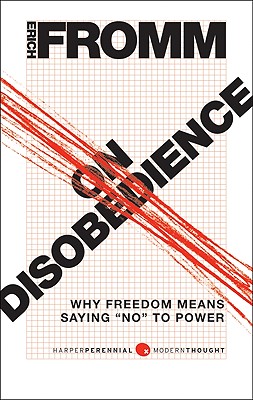 "Human history began with an act of disobedience, and it is not unlikely that it will be terminated by an act of obedience."

One of the great psychological and social philosophers of the twentieth century, Erich Fromm expounded on the importance of disobedience and the authentic voice of the individual in modern culture. As relevant now as when it was first published, On Disobedience is a collection of provocative essays, including the title entry, which suggests the very act of dissent—the choice to refuse to conform, to speak "no" to those in power—is essential to a humane society, both to ensure humankind's preservation and to allow for one person to reclaim a genuine sense of self.

Erich Fromm (1900-1980) emigrated from Germany in 1934 to the United States, where he held a private psychotherapeutic practice and taught at Columbia, Yale, and New York University. His many books include The Art of Loving, Escape from Freedom, Man for Himself, and The Anatomy of Human Destructiveness.