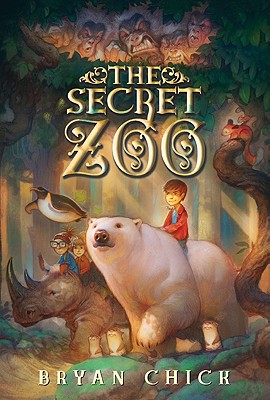 This is book number 1 in the Secret Zoo series.

A fast-paced and exciting read for middle grade fantasy, mystery, and animal buffs. Something strange is happening at the Clarksville City Zoo. Late at night, monkeys are scaling the walls and searching the neighborhood—but what are they looking for?

Noah, his sister Megan, and their best friends, Richie and Ella, live next door to the zoo. Megan is the first to notice the puzzling behavior of some of the animals. One day Megan disappears, and her brother and their friends realize it's up to them to find her. Their only choice is to follow a series of clues and sneak into the zoo. But once inside, they discover there's much more to the Clarksville City Zoo than they could ever have guessed...

Bryan Chick is the author of the Secret Zoo series. He originally had the idea for the series when he was a nine-year-old and wondered what would happen if zoo exhibits had secret doors that allowed children to go inside . . . and the animals to come outside. Bryan Chick lives with his wife and three children in Clarkston, Michigan.

“A fast-paced mix of mystery and fantasy…It promises to be the beginning of a popular series.” — School Library Journal

“An action-packed and breathless story about teamwork . . . the story should appeal both to animal-lovers and a broader audience.” — Publishers Weekly