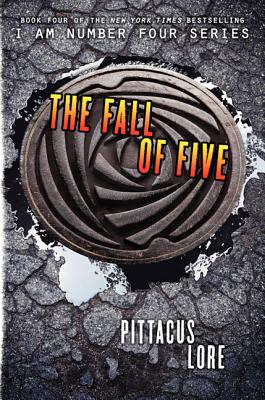 This is book number 4 in the Lorien Legacies series.

The fourth book of the #1 New York Times bestselling I Am Number Four series!

John Smith—Number Four—thought that things would change once he and Nine reunited with the others. But he was wrong. After facing off with the Mogadorian ruler and almost being killed, the Garde realize they are drastically unprepared. Now they're hiding out in Nine's Chicago penthouse, trying to figure out their next move.

Even with the return of an old ally, these superpowered teens aren’t strong enough yet to take on an entire army. To defeat their enemy, the Garde must master their Legacies and learn to work together as a team. And when they receive a sign from Number Five—the last missing member of the Garde—they know they are close to all being together finally. But could it be a trap? Time is running out, and the only thing they know for certain is that they have to get to Five before the Mogs do.

Michael Bay, director of Transformers, raved: “Number Four is a hero for this generation.” This epic young adult series is perfect for fans of action-packed science fiction like The Fifth Wave series by Rick Yancey, The Maze Runner series by James Dashner, and Orson Scott Card’s Ender’s Game.

The battle for Earth’s survival wages on. Read the rest of the series: #5: The Revenge of Seven, #6: The Fate of Ten, and #7: United as One.

“I Am Number Four is a breathless page-turner....So, gear-up sci-fi fans, the battle for Earth is on and there’s a new kid in town!” — Amazon.com