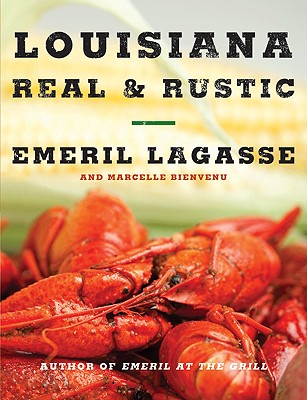 It's the essence of great eating with Emeril Lagasse in Louisiana Real & Rustic.

Join the award-winning chef, television personality, and restaurateur on a tour down the back roads and bayous of Louisiana for some of the greatest home cooking in America. With his authentic Louisiana recipes, Emeril takes the reader on a tour of the state, from country cabins in Cajun country to the refined town houses of Creole aristocracy, bringing to life the colorful history that has made Louisiana a true culinary crossroads.

Emeril Lagasse is a chef, restaurateur, and the author of eighteen bestselling cookbooks, including the recent Emeril's Kicked-Up Sandwiches and Sizzling Skillets and Other One Pot Wonders. He is the proprietor of thirteen award-winning restaurants across the country and is the host of The Originals with Emeril and Emeril's Florida, both airing on the Cooking Channel. He has been the food correspondent for ABC's Good Morning America for fourteen years. In 2002, Emeril established the Emeril Lagasse Foundation to support children's educational programs that inspire and mentor young people through the culinary arts and promote nutrition and healthy eating.